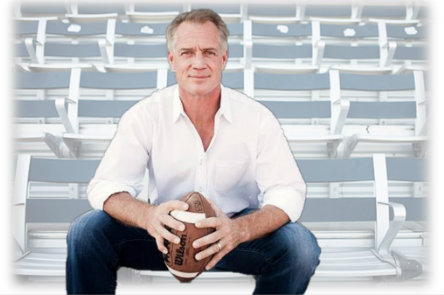 Emmy award-winning sports anchor and broadcast journalist Scott Murray will serve as emcee for the event and host a discussion with Johnston. The event is free and open to the public.

In February 2016, Texas Wesleyan announced that after a 75-year hiatus, football will be returning to campus.

Part of the discussion with Johnston and Murray will address the topic “Welcoming Football to Texas Wesleyan” from a sports journalism and mass communications perspective. Texas Wesleyan’s Head Coach Joe Prud’homme will present both guests with a special Rams Football gift at the end of the presentation.

During the event, audience members are invited to share their thoughts on the presentation using the hashtag #MHLSeries. Texas Wesleyan football fans are also using #TxWesFootball to track discussions about the new program.

Daryl Johnston, nicknamed “Moose” by a teammate who said he was a moose walking amongst a field of deer compared to the other running backs on the team, began his broadcasting career in 2000 during FOX's coverage of the 2000 NFL Europe League.

He is now a member of the NFL on FOX broadcast team with Kenny Albert. His other broadcasting credits have included NFL Network, co-hosting Inside the Huddle with Craig James on KDFW-TV, The Daryl Johnston Show on KXAS- TV, as well as The Moose Call, a weekly radio show on KRLD/KLIF in Dallas.

Johnston has contributed time to many charities including the Special Olympics, Children's Cancer Fund, Cystic Fibrosis and Literacy Instruction for Texas (LIFT). Additionally, Johnston is the chairman of “Slant 45”, one of the largest community- wide service-learning programs for children in U.S. history and the largest in NFL history.

Along with his contributions to charity, Johnston is also a principal at G9 Turf.