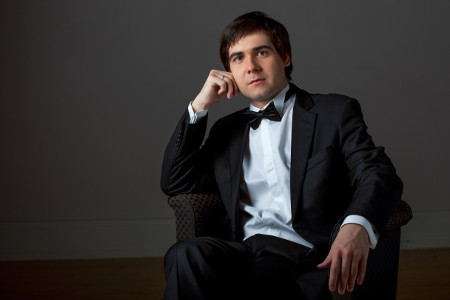 Texas Wesleyan University’s Department of Music is excited to invite students, faculty, staff and the entire Fort Worth community to a special “welcome” concert at 7:30 p.m. Friday, Dec. 1, in Nicholas Martin Hall, featuring Vadym Kholodenko, internationally-acclaimed pianist and winner of the 2013 Gold Medal at the Van Cliburn International Piano Competition.

Tickets to the concert are $15 and $5 for Texas Wesleyan students with their student ID. Tickets are available for purchase online in advance, or at the door.

The concert will officially welcome the University’s new Hamburg Steinway Grand Piano to its new home in Martin Hall, and is the first time a Cliburn gold medalist will have performed on the Texas Wesleyan campus.

“Having a performer of Kholodenko’s high caliber and international status play on this fine instrument in Martin Hall is an historical event for our department and for our university,” Dr. Jerry Bierschenk, D.M.A., chair of the Department of Music, said.

The piano, which was acquired by Texas Wesleyan in August for the benefit of students, music enthusiasts, and the entire Fort Worth community, was chosen by Kholodenko himself to be featured at the 2017 Cliburn competition. The prestigious piano was selected by 23 out of 30 competitors because of its remarkably “clear, melodic sound,” as was reported by the Fort Worth Star-Telegram.

Kholodenko’s program will include works by Mozart, Beethoven and Tchaikovsky. There will be a reception in Lou's Place following the concert.

Vadym Kholodenko is fast building a reputation as one of the most musically dynamic, technically gifted performers of the new generation of pianists, praised by the Philadelphia Enquirer in his performance of Tchaikovsky with the Philadelphia Orchestra for “his absorbing melodic shading [and] glittering passage work.” Winner of the 2013 Gold Medal at the Van Cliburn International Piano Competition, Kholodenko has begun to forge an international career throughout Europe, Asia and North America to great critical acclaim. Previous awards include First Prize at the 2011 Schubert Piano Competition in Dortmund, First Prize at the 2010 Sendai Piano Competition in Japan and the Grand Prix at the Maria Callas Competition in Athens.

Kholodenko was born in 1986 in Kiev, Ukraine, and at the age of 13, gave his first concerts in the U.S., China, Hungary and Croatia. In 2004, he was awarded the Russian Youth National Prize “Triumph.” In 2005 moved to Moscow to study at the Moscow State Conservatoire under the tutelage of the Honoured Artist of the USSR, Professor Vera Gornostaeva.

For more information about Vadym Kholodenko, visit his website, http://vadymkholodenko.com/.