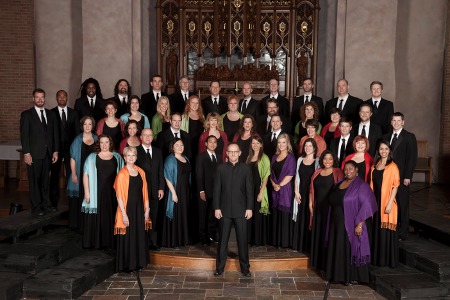 Professor Julie McCoy of the Department of Music will be on tour for the next three weeks with Conspirare, a Grammy® award-winning choir from Austin, as they perform and record the premiere of their conductor's new piece.

Words fall short to describe the musical, social and emotional impact of Considering Matthew Shepard, a new piece by Craig Hella Johnson that looks back on the life of a young gay man who fell victim to hate crime in October 1998 but through his death became a martyr for the LGBT cause and an important precursor to hate-crime prevention legislation. The piece, which includes works of Hafiz, Hildegard von Bingen, Michael Dennis Browne, and others set to music, is semi-staged in the manner of an oratorio.

This weekend Austin’s classical music radio station KMFA will live stream Considering Mathew Shepard at 3 p.m. on Sunday, Feb. 28.  Tune in to hear the sounds of Professor McCoy, among others, presenting this monumental work that remembers love and light over fear, hate and death.