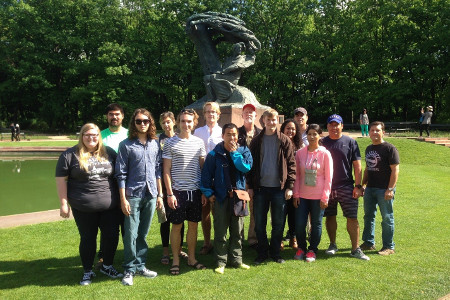 17 Ethics & the Arts in Eastern Europe faculty and students, led by Music Professor John Fisher and Religion Professor Mark Hanshaw, recently returned from two weeks travel and study in Leipzig and Berlin, Germany, and Warsaw and Kraków, Poland. The trip was an extension of several 2016-17 academic-year courses in humanities, religion and music.

The trip focused on the effects of World War I and II, Hitler, the Nazis, Stalin and the Cold War on the peoples of Germany, Poland and extended areas of Eastern Europe, while simultaneously recognizing the great contribution made by people from those areas in the fine and performing arts.

The trip began in Leipzig, Germany, home for a significant period of their lives to JS Bach, Robert Schumann, brother and sister composer-musicians Felix and Fanny Mendelssohn, and many others, as well as the birthplace of opera composer Richard Wagner. In Berlin, the group visited the Reichstag (Parliament Building), the Berlin Wall, Brandenburg Gate, the Stassi (E. German state security) Museum, the Palace of Tears (East Berlin-West Berlin train station separation point) and the Pergamon archeological museum.

In Warsaw, they made separate museum stops focused on the 1944 Warsaw Uprising, the 1000-year history of the Polish Jews, and the birthplace of Chopin at Żelazowa Wola. In Kraków, they toured the Wawel Cathedral and Castle complex, Oskar Schindler's factory, and the Auschwitz-Birkenau concentration camp.

All connections between cities were made by train. Bonus activities included a visit to the Kraków National Museum for viewing of Leonardo da Vinci’s priceless painting “Lady with an Ermine.”

For more information, contact Dr. Fisher at jfisher@txwes.edu or Dr. Hanshaw at mhanshaw@txwes.edu.