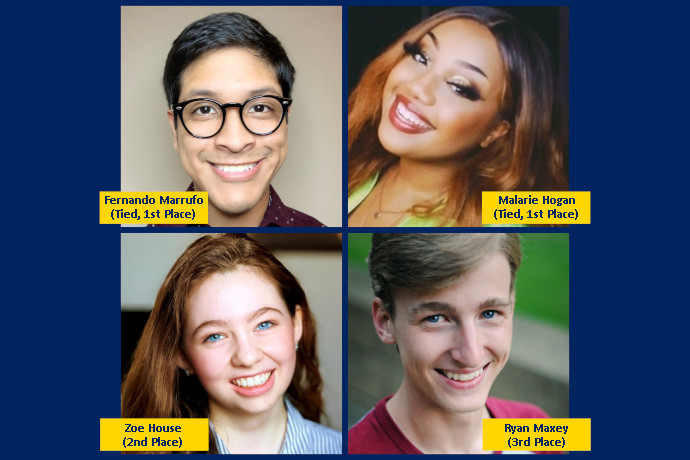 The music department, in conjunction with Sigma Alpha Iota, a service-oriented women's fraternity, held this year's Inter-American Music Competition virtually this year in an effort to maintain one of their most enduring traditions in the face of the pandemic. Following video submissions from 11 excellent competitors with music such as How Do I Love You? by Penny Rodriguez; the Rondo Sobre Temas Infantiles Argentiles by Alberto Ginastera; and Sometimes I Feel Like A Motherless Child, a traditional spiritual arranged by Moses Hogan; the judges from the alumnae chapter, along with music department liaison Dr. John Fisher, chose the winners.

In 3rd place, Ryan Maxey, with songs "The Monkey's Prayer" and "The Goat's Prayer" from Theron Kirk's Prayers from the Ark.

All pieces submitted to the Inter-American Music competition must have been composed by either South American or North American composers. Normally the audition process takes place in December and the winners present their pieces in a concert the following spring. Although the pandemic forced a change this year, they hope to be back to performing in a live concert for 2022.