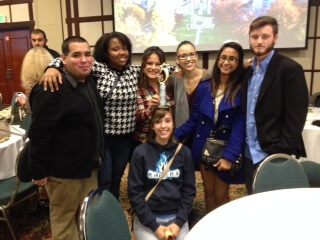 Seven students from Texas Wesleyan University competed in the Fifteenth Annual National Intercollegiate Mediation Tournament at Brenau University in Gainesville, Georgia on November 6-9, 2014. These students demonstrated their skills in both the mediator and advocate/client divisions. The team of Tyler Mendez, Kaylyn Carew and Hina Syed advanced to the semifinal round and were awarded seventh place in the field of 120 students representing universities from across the country. Texas Wesleyan was also strongly represented by Alan Villafana and Rachel Sanchez, Cynthia Gonzalez and Patricia Milbery.

In the tournament, teams of three students each go through three preliminary rounds serving as mediators, advocates and clients. Mediators work with co-mediators from different schools, which encourages students to recognize that mediation is about working together to reach a solution, rather than competing at every turn. Advocates and clients are judged on their ability to present their case, to articulate their strengths and weaknesses, and to work with the mediators toward a solution while also meeting their needs and interests.

The mediation team is coached by Barbara Kirby, J.D., Director of the Paralegal Studies program. Professor Kirby is very proud of her team, stating "This group of students is no doubt the best I have been with in my years as coach. They enjoyed the competition but understood that the event is about so much more. I am so proud of how they represented Texas Wesleyan, and the way they interacted with all of the students from other teams. It is a little trophy but they have big hearts!"

Professor Kirby is still optimistic that the team may receive a bid to participate in the International Law School Mediation Tournament being held at Drake University School of Law in March 2015.