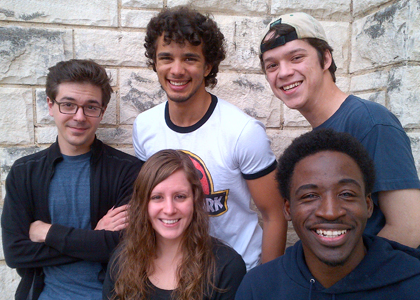 Theatre Wesleyan is pleased to announce the last production of the 2015-2016 season, PLAYMARKET The Devised Project: Telling Tales. This original script was written by theatre majors Logan Rodgers, Cameron Byerly, Dean Phillips II & Carlos Brumfield and English major Kimberly Vankirk. The performances are the capstone of the 15-month process during which the playwrights conducted research, determined the story and collaboratively wrote the script.

Telling Tales is the story of a woman nearing the predetermined end of her life who shares ‘tales’ with the man who is charged with her death.  This unique script is based on world mythology and religious beliefs and features an all-student production team and the on-stage work of 3 student directors and more than a dozen student & alumni actors.

Telling Tales will be presented on Sunday, May 1 at 3:00 & 7:00 pm in the Thad Smotherman Theatre. No reservations are necessary & admission is free.