Students get inside look at 'Phantom' tour at Bass Hall; interview with the cast 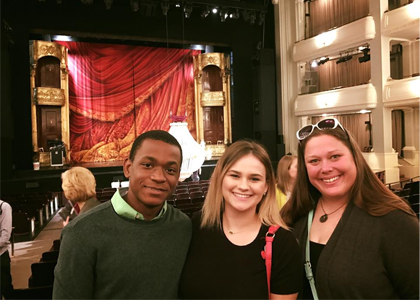 "The Phantom of the Opera is here..." in Fort Worth, Texas and three Theatre Wesleyan students were given the opportunity to get an inside look at the national tour of the longest-running Broadway musical at Bass Performance Hall.

Freshman theatre major Tristen Brown, sophomore theatre major Kate Collard, and junior theatre major Michelle Phillips (pictured, L-R) got to speak with lead cast members Derrick Davis (The Phantom) and Katie Travis (Christine) and got an inside look at the show's legendary chandelier with tour stage manager Mitchell Hodges. Davis made his debut with the tour at Bass Hall.

The following is an abridged transcription of the interview with our students and the cast:

MP: I just wanted to ask, I know [Katie] you've been at this for a while, but how long was it [Derrick] before you jumped in to rehearsing and now you're here doing the show.  What was the process like?

DD: The audition process was substantial, as it should be for a role of this caliber. I got the call and rehearsals started maybe a week later.  I was in Lion King [on Broadway as Mufasa] at the time and would rehearse Phantom during the day and go back to Lion King at night. But the rehearsal process was maybe about three to four weeks; two weeks in New York, then I flew out to California to join the rest of the company.

KC: What is the hardest part about touring? How do you keep up with your health?

KT: I've been with the tour for two years now and I sleep next to a humidifier. I have a steamer, take long showers, drink a lot of water and tea. I also have a stack of vitamins.  I basically have to fight against what my body naturally wants to do. Allergies are also a thing because you're traveling to different climates and the environment. You become obsessive.

TW: Talk about your educational backgrounds and previous theatre experiences.

DD: I graduated from LIU Post [Long Island University] with a music performance degree, with an emphasis in opera, then got the musical theatre bug. I did a lot of regional things and then I did Lion King in Vegas, on tour, and on Broadway. This role is the best of both worlds for me.

KT: I also have a degree in opera, and I've done a lot of training and have worked tons of bad jobs in [New York City]. Then I worked a lot of regional stuff and got my Equity card. One thing leads to the next, that's for sure.

TB: As long and demanding as the show is, how do you handle the multiple performances and keep the energy and avoid being on "autopilot"?

DD: Autopilot really isn't an option in this show, you know?

KT: After being with the tour for two years now, I honestly thought I would be.  But with a show like this, you can't. There's so much nuance to this particular show and this production. Moments sometimes come and go, to be honest, but then you've got to move forward --

DD: -- and avoid the fire coming out of the ground.

KT: Yeah, there's literal pyrotechnics and fire about to blow in my face and I'm thinking about where I'm going to lunch in between shows [on two show days] and I've got to get back in [the moment].

KT: I played Gretel in The Sound of Music and I think I always wanted to do this. I think once I really pursued it -- it's hard, but it's so rewarding when it's good. And it's so worth it to do -- honestly, in a small way, do some good in the world and that's what I can do. I can't do brain surgery, but this is my contribution and it's I love what I do. To be able to say that I had this thing I wanted to do as a kid, and it happened. That doesn't happen very often; it's pretty special.

The beloved story and thrilling score – with songs like “Music of the Night,” “All I Ask Of You,” and “Masquerade” – will be performed by a cast and orchestra of 52, making this Phantom one of the largest productions now on tour. The Phantom of the Opera plays at Bass Performance Hall in Fort Worth through Oct. 30.