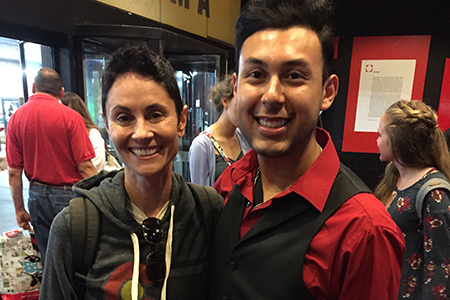 Theatre Wesleyan students, while traveling to New York for their annual Playmarket performance, were the only guests at a live talkback with cast members from the Tony Award-winning Best Musical Fun Home, including Tony Award-nominated Best Actress Beth Malone. The Broadway musical won a total of five Tony Awards in June.

"The experience was incredible," Jacob Rivera-Sanchez ‘15, theatre graduate, said. "Meeting the cast and listening to them talk about the show’s development, and what is like to be a part of a Broadway production, was a reminder of why we aspire to be professional actors and actresses."

Rivera-Sanchez said that he is fortunate to have seen several musicals in the Dallas-Fort Worth area and on Broadway, but has never been invited to a talkback with the cast.

"This was a once-in-lifetime experience for all of us," Rivera-Sanchez said. "We are so grateful to Liz for setting this up."

A night to remember

"For some of our students, it was their very first time to see a Broadway show," Connie Whitt-Lambert, Theatre Wesleyan professor and director who accompanied the group to New York, said.

After the performance, only the Theatre Wesleyan group was allowed to remain in the audience. Once the Fun Home cast members changed out of their costumes, they returned to the stage for the talkback.

"As part of our class preparations for the trip, the Playmarket students studied the history of Fun Home and some read the original graphic novel, which is the source material for the production," Whitt-Lambert said.

Rivera-Sanchez says that the cast explained how the show developed from a small, off-Broadway production to an award-winning musical.

"Some of the cast members have been with the show from the very beginning when they were only doing a script-reading, just like we do with Playmarket," Sanchez said. "It was encouraging to hear from the cast about how a little show, with a big story, can end up winning Best Musical."

Students were able to apply their own experiences with Theatre Wesleyan productions when considering the production and development of Fun Home. Whitt-Lambert said that seeing the show live and meeting the cast brought the entire learning experience full-circle.

"We were an incredibly unique group of theatre goers that evening," Whitt-Lambert said. 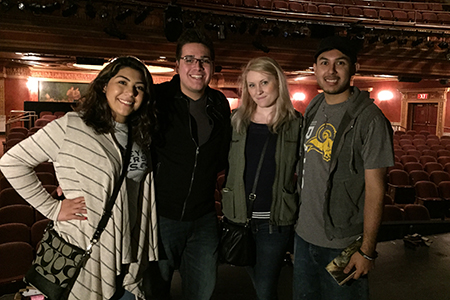