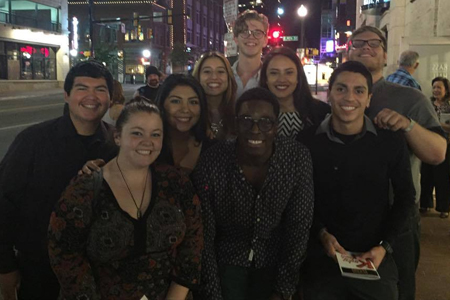 "It’s always a great opportunity for theatre students to be able to see a ‘direct from Broadway’ tour," Rivera-Sanchez says. "I knew and heard how much fun Kinky Boots has been on Broadway and that Fort Worth students would love the opportunity to experience it closer to home."

The evenings involve college-aged students attending Broadway at the Bass shows at Bass Performance Hall. Then, students are asked to help promote the show — using special hashtags — by sharing photos and posts on their social media accounts. The event is designed to encourage high school and college students across the Metroplex to attend the theatre.

This is the second time that Rivera-Sanchez was asked to organize a group. In July, he organized a group of then-incoming and current Theatre Wesleyan students and they received a behind-the-scenes look at the musical, Pippin, as well as tickets to the show.

The Broadway tour of Kinky Boots, with music by Grammy- and Tony Award-winner Cyndi Lauper, had its opening night in Fort Worth on Oct. 27. Students who attended the performance included:

"We had an amazing night," Salazar said. "Kinky Boots blew us all away! Thanks to Bass Hall for allowing us to experience such an awesome show."

"[The show was] professional theater to the highest pedigree," Dawson said. "The musical numbers were fantastic, the sets were extravagant, the costumes were beautiful and everything just worked together perfectly. I can't wait until the day that I work professionally."

"[Kinky Boots] makes me so excited for the day that I get to work with professionals who can put together such a high caliber production," Flores agreed.

For more information on Kinky Boots at Bass Performance Hall, including a special discount exclusively for students, visit the Theatre Wesleyan Facebook! The show plays in Fort Worth through Nov. 1.

Take a look at other opportunities that our Theatre Wesleyan students have had!