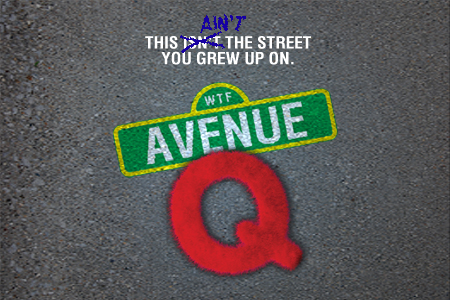 Theatre majors from the cast of the upcoming musical will participate in this private workshop on Friday, March 1 and Saturday, March 2 to learn about the performance art of puppetry using original puppets designed by Lyon. Texas Wesleyan University will be among the several universities and professional theatres Lyon has been invited to for these specialized Avenue Q workshops.

Theatre major Alastair Sigala Ramirez will be given the opportunity to design original puppets for Theatre Wesleyan's production, which department students will learn how to build with guidance and supervision from artist, designer, and alumna Kathy Kreuter '93 of Fort Worth's StageWorks. Kreuter's previous experience includes work with Irene Corey Costume Design and the national tour of Rudolph, The Red Nose Reindeer: The Musical and the hit PBS children's series, Barney & Friends.

Originally from Rochester, NY, and now based in the New York City area, Rick Lyon studied theatre at Penn State University, and puppetry at the Institute of Professional Puppetry Arts in Connecticut and the Institut Internationale de la Marionnette in France. It was while he was studying in Connecticut in 1986 that he first met the late Jim Henson, which later led to working for him as a puppeteer with the Muppets, and Jim Henson's Creature Shop.

He has also worked independently and with other companies on television and film projects for Columbia Pictures, New Line Cinema, ABC, CBS, PBS, The Disney Channel, Nickelodeon, Comedy Central, VH1, and Fox.

In addition to performing, he also designs and builds custom puppets, including the original puppets for the Tony Award-winning musical Avenue Q on Broadway, in London, and on tour nationally. Other projects have included puppets for Comedy Central's Crank Yankers, puppets and props for Nickelodeon's Stick Stickly, television pilots for VH1, Nickelodeon, PBS, numerous industrials and home videos, and the live national tour of PBS's The Magic Schoolbus.

When time permits, he performs live shows with his own troupe, The Lyon Puppets. Performances by The Lyon Puppets feature a colorful cast of bright, eye-catching puppets, which he designs and builds himself. He also writes his own scripts, and composes the music for his original shows. He arranges, performs, and records the music with collaborators John Lynch and Jim Ream in the guise of the band "The Ripmeisters."