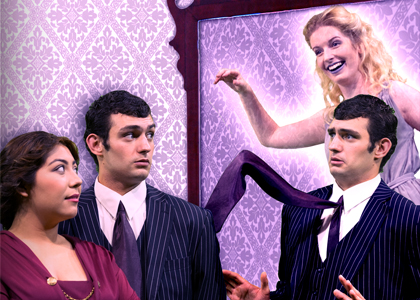 Theatre Wesleyan is pleased to unveil the poster for the upcoming production of Blithe Spirit, the classic comedy by Noël Coward. Junior theatre major, Kimberly Owen, plays Madame Arcati in the show and designed the poster.  Blithe Spirit is directed by Professor of Theatre, Connie Whitt-Lambert.

The smash comedy hit of the London and Broadway stages, this much-revived classic from the playwright of Private Lives offers up fussy, cantankerous novelist Charles Condomine, re-married but haunted (literally) by the ghost of his late first wife, the clever and insistent Elvira who is called up by a visiting "happy medium", one Madame Arcati. As the (worldly and un-) personalities clash, Charles' current wife Ruth is accidentally killed, "passes over", joins Elvira and the two "blithe spirits" haunt the hapless Charles into perpetuity.

Tickets are now on sale by calling 817-531-4211 or by visiting the Theatre Wesleyan website.