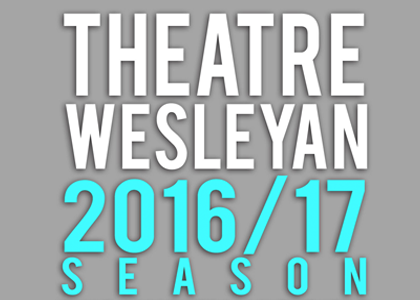 Theatre Wesleyan is excited to announce the line-up for the 2016-17 season. Compelling stories about families, relationships and communities will be told in this upcoming season of Theatre Wesleyan productions. From highly acclaimed playwrights, this season will be filled with drama, laughter, satire and original works.

It's raining. Gabriel York is awaiting the arrival of his grown son whom he hasn't seen since he was seven. "I know what he wants. He wants what all young men want from their fathers. He wants to know who he is. Where he comes from. Where he belongs. And for the life of me I don't know what to tell him." That's the beginning of this compelling family saga that takes us back and forth in time from one generation to another, from 1959 to 2039, from London to Australia. With four generations of fathers and sons, their mothers, lovers and wives, the play is epic in its scope, yet at the same time extraordinarily intimate.

"A poignant and funny play about the ways, both sudden and slow, that lives can change irrevocably," says Variety. After Callie meets Sara, the two unexpectedly fall in love. Their first kiss provokes a violent attack that transforms their lives in a way they could never anticipate.

Vanya and Sonia and Masha and Spike by Christopher Durang (February 9 – 19, 2017)
Directed By Jeanne Everton

Winner of the 2013 Tony Award® for Best Play! Middle-aged siblings Vanya and Sonia share a home in Bucks County, PA, where they bicker and complain about the circumstances of their lives. Suddenly, their movie-star sister, Masha, swoops in with her new boy toy, Spike. Old resentments flare up, eventually leading to threats to sell the house. Also on the scene are sassy maid Cassandra, who can predict the future, and a lovely young aspiring actress named Nina, whose prettiness somewhat worries the imperious Masha.

Theatre Wesleyan alumni and current students will have the opportunity to submit an original full-length or one-act play to be presented at Playmarket.  Then, a screening panel will select scripts from the pool of entries to be sent to the final judges in New York.  One play will be selected for a concert reading to be presented at Texas Wesleyan University and in New York City!

Submission guidelines for Playmarket 2017 will be forthcoming.
Texas Wesleyan University performance date(s) will be announced in the coming months.

Season tickets are available by visiting the Theatre Wesleyan website, the virtual box office, or by calling (817) 531-4211. Each season ticket will admit one to all four mainstage productions in Theatre Wesleyan’s 2016/17 season. Admission is free for the on-campus performance of Playmarket.

Current and incoming students may have the opportunity to read these scripts in preparation for auditions and to apply for design positions. The collection of all four mainstage scripts will be available through April 30, 2017 at the West Library for 2-hour in-house reserve. Also, students may come by the Theatre Wesleyan business office during regular and/or summer hours to read the collection. All four scripts are also available for purchase through the publisher or on Amazon.