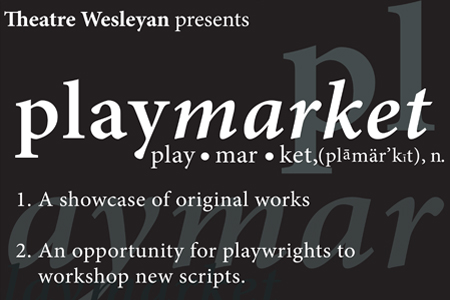 Theatre Wesleyan's Playmarket program will present a staged reading of an original student-written work: The Hooverville Melodies, or The Fairytales of the Hyde Family by Ryan Simón.  Admission will be free and the performances will be at 2 p.m. and 7 p.m. on Sunday, Dec. 9 in the Thad Smotherman Theatre/Law Sone Fine Arts building.

This staged reading of an original script features Simón's work as a student playwright/composer, with an all-student team including 15 actors, a choreographer, a team of mask-makers and technicians.  Professor Connie Whitt-Lambert directs.

This is the story of the dysfunctional Hyde family that finds a fairy tale book, The Hooverville Melodies, in their picnic basket. The dismal fairy tale tells of a royal family that has been changed into animals by a Blue Witch. As the Hyde family reads on, the lines between the fairy tale and their lives becomes more and more blurred. Their secrets begin to be revealed and temptation embraces them completely.

Ryan Simón (Playwright/Composer) is a sophomore theatre major. Theatre Wesleyan credits include: The Hostage (Kate/Music Director/Arranger/Pianist), Tartuffe (Cléante), Oklahoma! (Ensemble), Important Hats of the Twentieth Century (Billy/Various Characters), and Spring Awakening (Moritz). Ryan is a member of Alpha Psi Omega and is the recipient of the President’s Scholarship.

Torris Curry II (Choreographer/Actor) is a senior theatre major at Texas Wesleyan. He has taken many dance classes from various instructors from around the state, been captain of Texas Wesleyan’s GoldLine for 3 years and is a budding actor and choreographer in the area. Some of his credits include: You’re a Good Man, Charlie Brown (Choreographer), The Hostage (Choreography/Musical Staging), Back to The 80’s (Asst. Choreographer).