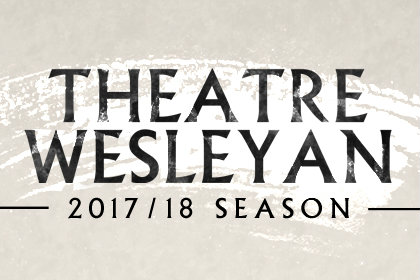 Texas Wesleyan University's Department of Theatre has announced that tickets are now on sale for their 2017/18 season.

One classic play, a rock musical, a new comedy fresh from off-Broadway and a classic Rodgers & Hammerstein musical will round out the 64th season of shows at Theatre Wesleyan.

The smash comedy hit of the London and Broadway stages, this much-revived classic from the playwright of Private Lives offers up fussy, cantankerous novelist Charles Condomine, re-married but haunted (literally) by the ghost of his late first wife, the clever and insistent Elvira who is called up by a visiting "happy medium", one Madame Arcati. As the (worldly and un-) personalities clash, Charles' current wife Ruth is accidentally killed, "passes over", joins Elvira and the two "blithe spirits" haunt the hapless Charles into perpetuity.

The winner of eight Tony Awards®, including Best Musical, told by Duncan Sheik and Steven Sater through what Entertainment Weekly called, "the most gorgeous Broadway score this decade," Spring Awakening explores the journey from adolescence to adulthood with a poignancy and passion that is illuminating and unforgettable. The landmark musical is an electrifying fusion of morality, sexuality and rock and roll that is exhilarating audiences across the nation like no other musical in years.

Sam Greevy is the toast of 1920s women's apparel until the maverick fashion designer Sam Roms springs his radical creations on the world. The Sweatshirt, The Track Suit, Skater Pants: the clothes he comes up with are as from another dimension, and maybe they are. As Greevy tries to adapt to rapidly changing fashions, a parallel drama unfolds in Albany, circa 1998: a teenager stoner keeps losing articles of clothing, and a man keeps bursting out of his closet and taking them.

Set in a Western Indian territory just after the turn of the century, the high-spirited rivalry between the local farmers and cowboys provides the colorful background against which Curly, a handsome cowboy, and Laurey, a winsome farm girl, play out their love story. Although the road to true love never runs smooth, with these two headstrong romantics holding the reins, love's journey is as bumpy as a surrey ride down a country road. That they will succeed in making a new life together we have no doubt, and that this new life will begin in a brand-new state provides the ultimate climax to the triumphant OKLAHOMA!

Presented by special arrangement with The Rodgers and Hammerstein Organization.