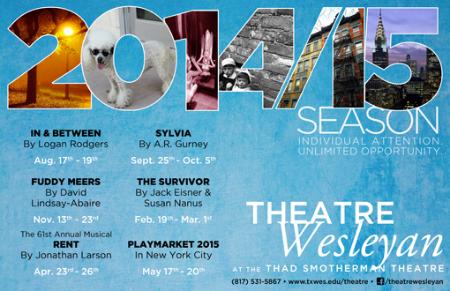 A new season is on the horizon for Theatre Wesleyan, and the 2014-15 lineup is sure to have something for all audiences.

Two men find themselves stranded in an enchanted forest, seemingly void of time or purpose. In attempting to discover what brought them together, they realize a secret as old as time itself, and its obvious keeper.

Empty nesters Greg and Kate have moved back to Manhattan after twenty-two years in the suburbs. As Kate tells Greg: "The dog phase of my life is definitely over." But life has a way of giving you what you think you don't want. Greg finds Sylvia, a street-smart lab/poodle mix, and brings her home. She promptly becomes a bone of contention between Greg and Kate, testing their marriage to hilarious and touching effect.

Claire awakens each morning as a blank slate on which her husband and teenage son must imprint the facts of her life.

This gripping drama takes place in the Warsaw ghetto during World War II. A group of determined teenagers organize to resist the Nazis. They begin by smuggling food into the ghetto. Eventually they form the nucleus of the Warsaw uprising. These heroic young people make a pact: if anyone survives their dreadful ordeal, he or she will tell the story of what happened to them. There was only one survivor and this is the story he told.

This rock opera tells the story of one year in the life of a group of bohemians struggling in modern day East Village New York. The story centers around Mark and Roger, two roommates. While a former tragedy has made Roger numb to life, Mark tries to capture it through his attempts to make a film. In the year that follows, the group deals with love, loss, AIDS, and modern day life in one truly powerful story.