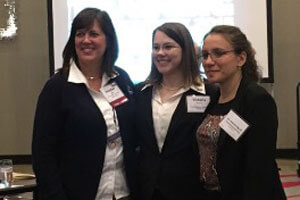 During the event small group of Enactus students from different universities had a chance to meet with Walmart/Sam’s Club executives and several were offered summer field internships, including Victoria Hoscher, vice president of the Entrepreneurship Club, who received a summer internship with Sam’s Club.

The Field Internship Program is the first step to a career with Sam’s Club potentially leading to full-time management roles.

Hoscher was chosen to tour a local Sam’s Club and Walmart Store with executives from both Walmart and Sam’s Club, where she learned about operations. After her interview with executives, she was offered the job in front of an audience of students, faculty advisors and executives.