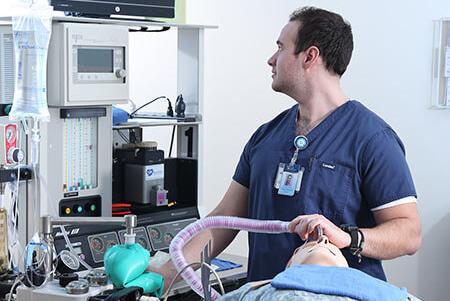 The School of Health Professions and Doctor of Nurse Anesthesia Practice Completion Program (cDNAP) graduates have produced 20 publications since their first cohort of students graduated in 2011. Since then, 145 DNAP students have walked the stage.

Many of the cDNAP graduates are leaders in their field. Five graduates are or have been directors of nurse anesthesia programs across the country. These include the last two directors of the prestigious U.S. Army Graduate Program of Nurse Anesthesia and the current director of the Uniformed Services of the Health Sciences Nurse Anesthesia Program. Both programs are ranked in the top 10 of 120 school rankings by U.S. News & World Report. Currently, there are several other nurse anesthesia program directors and faculty from across the country enrolled in the program. Word has spread!

With the program being online, several nurse anesthesia business owners graduated from the program from states including Louisiana, Arkansas, and Oklahoma. A current cDNAP student recently partnered with other healthcare providers to open a stand-alone clinic providing evidence-based, cutting-edge care for patients suffering from treatment-resistant depression. The knowledge gained thus far in the program has already helped make this compassionate business a success. Other graduates serve in leadership positions including serving on the boards of state nurse anesthesia associations from Oklahoma to South Carolina.

The cDNAP graduates complete a major scholarly work project as part of the degree requirements for the program. These are all disseminated via a service provided by the American Association of Nurse Anesthetists Foundation. Several graduates have gone on to further disseminate their works. Nineteen graduates have published their papers in peer-reviewed healthcare journals including American Association of Nurse Anesthetists Journal, the Journal of PeriAnesthesia Nursing, Gastroenterology Nursing, the AORN Journal and Military Medicine, while 27 graduates have also presented their works at scientific meetings held in locations ranging from Seattle and San Francisco to New York and Orlando.

Where are they now?

Several graduates have continued their scholarship including 2 current nurse anesthesia faculty members, Dr. Tito Tubog, DNAP, CRNA and Dr. Terri Kane, DNAP, CRNA. Since graduation from the cDNAP Program, this team has published two systematic reviews with meta-analysis examining critical aspects of nurse anesthesia practice including the prevention of pain and other complications in women undergoing surgery. The systematic review with meta-analysis is the highest level of evidence used to examine a health problem and these two faculty are among the handful of CRNAs who have published these rigorous scholarly works in peer-reviewed journals.

The current cDNAP Program is dynamic. Under the leadership of Dr. Gabaldon, DHA, CRNA and Dr. Austin, Ph.D., CRNA, new areas of focus and quality improvement measures will now be offered starting Summer 2018. For example, a new healthcare administration focus. In collaboration with Texas Wesleyan University School of Business faculty and scholarly CRNA faculty, this program is making an impact on the healthcare industry. Stay tuned - a dual cDNAP/MBA degree is on the horizon.

For more information contact the School of Health Professions at 817-531-4455 or sohp@txwes.edu.