From the Magazine: Super-Bug Fighters 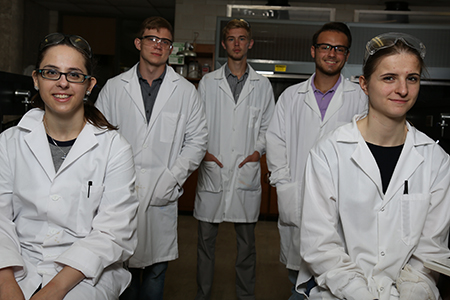 It’s a rare opportunity to be an active part of scientific research, especially for undergraduates, but over the summer five science students had paid internships in the labs of three Texas Wesleyan professors, thanks to a grant by the Robert A. Welch Foundation.

The battle against super bugs like MRSA is a fight Cody Dorton is grateful to be part of. He and classmate Charlotte Salin are synthesizing novel amino acid compounds in the lab of Phillip Pelphrey, chemistry associate professor. The goal is to create new drugs that will kill 21st-century bacterial menaces.

Dorton, a self-professed science nerd, is aiming toward medical school and jumped at the chance to work in the lab. “If you’re interested in a scientific field, you have to know how to do this,” he says. “You have to be familiar with the day-to-day aspect of science.”

Being able to run real-world experiments is “unique,” he says. “You don’t just get to help others, it is in essence your project and you can take it as far as you want.”

He admits that he gets a kick out of the intricacies of antibacterial compounds.

“I enjoy coming in every day. It’s a blast.”

Other parts in the series: