Early voting for May election cycle open until May 6

'Tis the season for the May election cycle and on the ballot one will find the election of city council members and school board members. Specifically in the City of Fort Worth, the ballot includes the 2014 Bond Program, Crime Control and Prevention District renewal and District 9 Special Election. Early voting is open until May 6, with the election slated for May 10th. Bring your voter registration card or photo identification to vote. 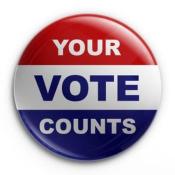 Mayor Betsy Price states in her letter to the citizens of Fort Worth, “The bond package was the most publically vetted bond proposal in the city’s history.”

Renewal of the ½-cent sales tax that funds Crime Control and Prevention District is also on the ballot. CCPD has to be approved by voters every five years.

The District 9 Special Election will fill Council Member Joel Burns seat on the City Council for the remainder of the term. Six candidates are vying for this council seat.

Texas Wesleyan University
At Texas Wesleyan, we have a rich history and a Texas-sized reputation. As stewards of the University, it is our responsibility to build a future as bright as our past.
Upcoming Events
Jan
28
Transparency in Teaching and Learning (TILT)--Jan 28
Jan
28
TXWES Behind the Scenes: Music Department
Jan
29
Classes begin for spring 2021
Jan
30
Weekend Program Track B Classes Begin
Feb
2
Using Office 365 for Collaboration--Feb 2
Feb
8
Using Office 365 for Collaboration--Feb 8