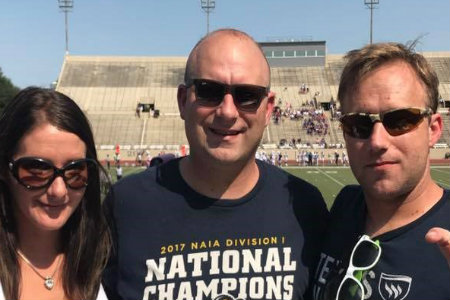 Jim Bridges ’04 is a new member of the Alumni Association Board of Directors. He is a legacy alum and currently resides in Lantana, TX with his wife Morgan and three children, Caroline, Jake and Katelyn. Jim owns and manages Jim Bridges State Farm Agency and was named a State Farm Insurance Chairman’s Circle Agent in 2013.

Jim has always had close ties to Texas Wesleyan, as he is a part of a legacy family. His brother Neal is a TXWES graduate and his grandparents, Jim and Helen, actually met at the University in the 1950s, and the rest is history. Jim has many fond memories of his time at Texas Wesleyan, but his favorite was chartering the Zeta Xi chapter of the Kappa Alpha Order. Jim continues to support the University as a member of Ram Club, the athletic booster club, and he gives to the Johnnie Edwards ‘39, Dan Hart ’47, Jim Bridges ‘54, Ray Jefferson ‘54 Endowed Basketball Scholarship.