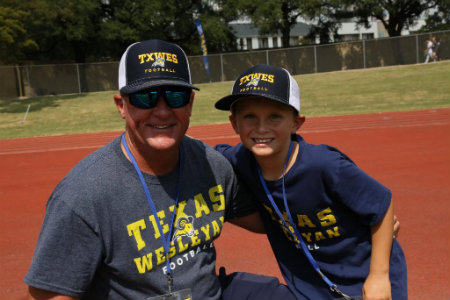 Mark Ball ’79 MA ’87 is a new member of the Alumni Association Board of Directors. He currently lives in Granbury, TX with his wife Lori. Mark is a business development manager for Hellas Construction, Inc. Prior to his job with Hellas, he was hired on as athletic director for Wylie ISD. Through the years, he has received many accolades as an AD including induction into the Texas High School Athletic Directors Association Hall of Honor and Wylie ISD Sports Hall of Honor. He is also a recipient of the National Football Foundation & College of Fame Leadership Award.

Mark’s relationship with Texas Wesleyan began when he was recruited to play baseball for the University. He was drawn to the staff and faculty of Texas Wesleyan and appreciated that they catered to the concerns of students on a daily basis. He is especially grateful to Dr. Schrader and Ray Jefferson ’54 who helped him secure a job at Bridges Sporting Goods, owned by Jim Bridges ’54. This allowed him to finish his last few hours at the University and that is also where he initially met his wife.

Texas Wesleyan definitely played a role in Mark’s career. The University provided him the tools to engage in teamwork, organization and the ability to be persistent. Mark continues to support the University as a member of Ram Club, the athletic booster club, and he consistently gives to the Wesleyan Fund.