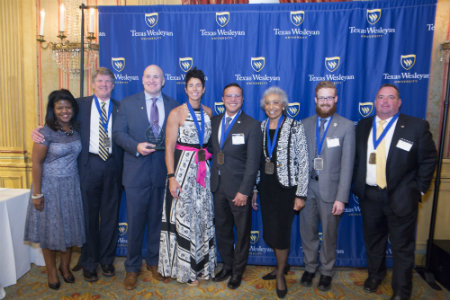 Last week, over 170 alumni and friends gathered at the Fort Worth Club for the annual Alumni Medal Dinner to honor seven individuals whose admirable contributions are excellent reflections of the University.

Alumnus of the Year – Michael Williams ’77, DO, MD

Michael Williams serves on the Texas Wesleyan Board of Trustees and is currently the President of UNT Health Science Center. Under his leadership at Hill County Memorial Hospital, the institute received numerous state and national awards and became a Truven Top 100 U.S. hospital for 2012 and 2013. In addition to his service as a trustee, Dr. Williams has worked to find collaborative opportunities between UNTHSC and Texas Wesleyan’s academic programs.

Juan Quintana is an alumnus of Texas Wesleyan’s GPNA program and has been very involved in multiple nurse anesthetists organizations across the country. Dr. Quintana has been practicing anesthesia since 1997 and is a leader in the area of education and evaluation of cost-effectiveness and efficiency. Quintana has continued to move the field of Nursing Anesthesia tremendously through is unwavering support in the advancement of science and technology.

Longtime Texas Wesleyan Board of Trustee member Norma Roby was named an Honorary Alumna at the annual Alumni Medal Dinner. Roby received this award because of her endless work to not only fuel the community of Fort Worth, but to also create a collaborative relationship with the city and Texas Wesleyan University. Her continued support of the University makes her a deserved recipient of this honor.

During his time as a student, Tyler was heavily involved on campus and held many leadership roles in a variety of organizations. In the 10 short years since his graduation, Atkinson has become a staple civil servant in the community. Since 2014, Tyler has served our City as a Municipal Court Judge. At the time of appointment, Tyler was the youngest Judge in the State of Texas.

Glen has a long involvement with the Alumni Association Board of Directors, where he is currently the Immediate Past President. His passion to give back to Texas Wesleyan has been most evident in his leadership to increase the Alumni Scholarship Endowment by approximately 40% over the last four years. He sees the joy in Texas Wesleyan’s continued growth and how it stems from the great influence of many faculty and staff members of the University.

Brennen Shingleton started his master’s while serving as an assistant coach for the Texas Wesleyan basketball team and has since brought the team it’s second NAIA Division I National Championship this last year. Shingleton has worked tirelessly to make TXWES athletics – particularly the men’s basketball team – what it is today. His continued support of the program and the University as a whole has made him a permanent fixture in the heart of Texas Wesleyan University.

While at Wesleyan, Stephanie played on the volleyball and basketball teams and proved herself to be a star athlete. She made three NAIA volleyball national appearances; was a two-year All-American volleyball player; was selected on the 1st Team All-Tournament Nationals Team in volleyball; made All-Conference and All-District teams in basketball. Kalbfleisch ’91 is the current owner and club director of Fort Worth Fire Volleyball Club and has always had a passion for helping young athletes.