Seven alumni and friends were honored at Alumni Medal Dinner 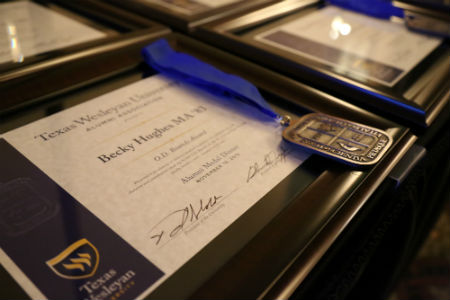 Last week, over 160 alumni and friends gathered at the Alumni Medal Dinner to honor seven individuals whose admirable contributions are excellent reflections of the University. ‌

One award was kept a secret until the event. Caught very much off guard, President Fred Slabach was presented the Honorary Alumnus Award. The positive changes and vibrancy that he has brought to Texas Wesleyan has truly made a difference. President Slabach has executed a bold agenda that not only cultivates student critical thinking, but also revitalizes Texas Wesleyan’s home in East Fort Worth as an emerging academic and economic center.

Dr. Bill Hailey came to Wesleyan in the fall of 1953 as a freshman and retired from the University 56 years later. The Wesleyan experience proved powerful for he hardly left the campus. Dr. Hailey served in many roles at Wesleyan including professor, alumni board president, provost and interim president, to name a few. He has contributed greatly to the University through the years and we are thankful for his dedication.

Former Wesleyan SGA President Chris Masingill was appointed by President Obama and confirmed by the U.S. Senate in 2010 to serve as the Federal Co-Chairman of the Delta Regional Authority and was recently awarded the Federal Leadership in Economic Development Programs Award by the International Economic Development Council for his leadership in advancing economic development initiatives in the Delta region. Masingill has grown to be an exceptional individual and truly works to make the world a better place.

Rod Stepp is a proud alumnus of Texas A&M University but has always been a great friend to Texas Wesleyan. He and wife Claudia ’72 have been responsible for the Claudia Stepp Scene Shop and have contributed to numerous other Wesleyan projects including being major contributors towards the Rosedale Renaissance development and establishing an endowed scholarship in honor of Dr. Ibrahim Salih.

Karen Cole has a long history with Texas Wesleyan. She attended the University for two years then returned years later to finish her degree. Karen has served the University in many different capacities including multiple roles in the business office and serving on the Alumni Association Board of Directors as treasurer, vice president and president. She is currently the immediate past president of the Alumni Board and continues to do everything she can to support her alma mater.

A year after graduating from Wesleyan, Sherwood returned as a staff member at West Library. Working his way up, Sherwood landed the role of university archivist in 1997 and it has been his passion ever since. His love of history and of Wesleyan helped in the creation of the 125th Anniversary coffee table book coming soon.

Hughes has accumulated over 30 years of experience as a successful player, coach, teacher and administrator. At Texas Wesleyan, Hughes was head volleyball coach from 1980-91 and made nine appearances in the NAIA National including four top-five finishes. She made a strong impression on her former players and continues to make an impact as a facilitator at Camp Thurman Experiential Learning Program in Arlington.