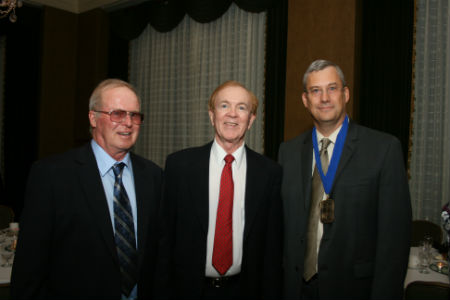 Such was the case on Jan. 13, 2015, when beloved Texas Wesleyan professor Bobby Deaton passed away from a massive stroke. The news traveled quickly. After all, Deaton taught at Texas Wesleyan for 47 years. Everyone who knew him was saddened by the death of a dedicated scientist and physics professor. Bobby was committed to life-long learning, and his record of accomplishments during his career was stellar.

Two former Deaton scholars, Dr. Greg Phillips ’70 and Dr. Victor Test ’86, knew they had to do something to remember the professor who not only taught them, but mentored them throughout their journeys in medical school and beyond. The doctors decided a $25,000 endowed scholarship was the best way to memorialize the much-loved professor.

In December 2015, letters signed by Dr. Phillips and Dr. Test were sent to alumni in the medical and dental fields, as well as Texas Wesleyan faculty, staff and friends who worked with or knew Deaton. Dr. Test and Dr. Phillips worked diligently to garner each and every gift that was given in support of the Bobby Deaton Memorial Scholarship. In addition, follow-up phone calls were made and emails were sent asking for support.

On May 31, 18 months after Deaton’s death, the $25,000 goal was reached and the scholarship endowed. In the fall of 2017, the first Bobby Deaton Memorial Scholarship will be awarded to a Pre-Dental or Pre-Medical student in the Pre-Professional Program and enrolled in the School of Natural and Social Sciences at Texas Wesleyan University. Nothing would make Deaton happier than to be remembered this way, and that is a good thing.

To contribute to the Bobby Deaton Memorial Scholarship, or to endow a scholarship of your own, please contact Gina Phillips ’97 MS ’07 at gphillips@txwes.edu or call 817-531-4220.

Bobby Deaton taught at Texas Wesleyan for 47 years. He was very interested in helping students matriculate to dental and medical school, serving as a mentor to countless students at Texas Wesleyan. He was a tireless volunteer in many other efforts as well, serving as the advisor to Alpha Chi, chairing Texas Wesleyan’s Pre-Professional Program, chauffeuring geology students to Oklahoma to search for fossils, and working with student scientists to piece together a fossilized 1,000-pound dinosaur skull from his own excavated triceratops.

Deaton attended UT, Baylor and UTA, and earned a Ph.D. in physics and a master's degree in geology. He authored over 60 academic papers, was granted numerous patents, and was the first person to be inducted (in 2008) into the Texas Amateur Athletic Federation Hall of Fame for three sports: basketball, fast-pitch softball, and tennis. But teaching Texas Wesleyan students and watching them succeed was his passion.