Join us for a send-off reception for Darren White 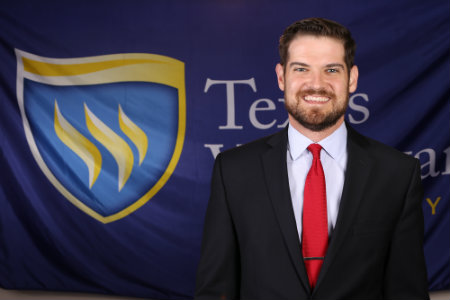 Darren White will be stepping down as associate vice president of marketing & communications after more than eight years of service to Texas Wesleyan.

During his tenure at Texas Wesleyan, Darren has been the creative force and voice behind the university’s defining “Smaller. Smarter.” campaign, which is the most successful campaign in the history of our university. The campaign has garnered a remarkable 92 marketing and advertising awards, including three awards from the FW American Advertising Federation, five Telly Awards and a Lone Star Emmy nomination. Since the launch of the campaign in 2012, our enrollment and admissions momentum has increasingly been on the rise, as has the university’s perception and awareness.

Darren has contributed greatly to university strategic initiatives including admissions marketing and enrollment management, creative for the 2020 Vision strategic plan and capital campaigns, the university-wide customer service initiative and more.

Darren’s leadership in the area of integrated marketing in higher education is changing the industry. He will begin the next stage of his career as a higher ed marketing consultant.

Please join the Office of Marketing & Communications for a come-and-go, send-off reception for Darren from 2:30 to 4 p.m. Monday, Jan. 29, in Lou’s Place. Darren will always be a part of the Texas Wesleyan family.  Help us thank him for his service and dedication, and wish him the best of luck.