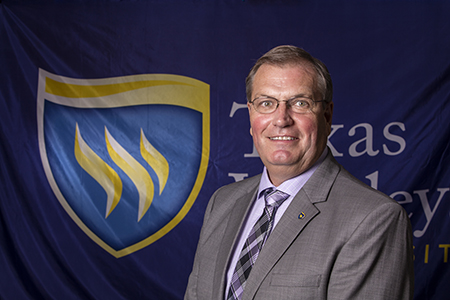 Griggs is responsible for developing partnerships between corporations, school districts and healthcare organizations and Texas Wesleyan’s graduate programs, including the newly formed School of Health Professions.

Griggs will also lead the initiative for developing corporate partnerships to support Texas Wesleyan’s online MBA program – a program that is currently in the development stage.

“Mark’s experience in developing community partnerships is an asset for Texas Wesleyan and an asset for businesses,” John Veilleux, vice president for marketing and communications, said. “We’re excited about his new role and know he will be an integral part of our success in developing and launching new academic programming while supporting businesses in our community.”

Griggs comes to the Texas Wesleyan with an abundance of service leadership and B2B experience. In his 35-year career with Pitney Bowes, Griggs held several leadership positions managing large field organizations. After leaving Pitney Bowes, Griggs joined the University of Phoenix as an account executive where he developed several partnerships with major corporations in the DFW area and was successful growing the university’s professional development programs.

In his spare time, Griggs enjoys spending time with his wife Donna of 40 years, their three daughters and two granddaughters, and soon-to-be third granddaughter.

Griggs volunteers his time coaching young women’s volleyball for the local Fort Worth YMCA and working in the community.

Mark received his MBA from the University of Phoenix and is a member of Delta Mu Delta, an international honor society for business administration.