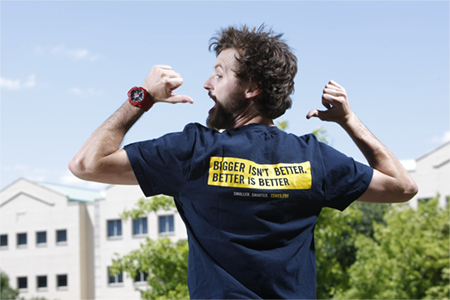 It’s been five years (yes, five!) since Texas Wesleyan began its award-winning “Smaller. Smarter.” campaign, and we’re commemorating the milestone with a special event Oct. 18. We're just asking you to do one thing. Vote for your favorite commercial.

And we’re giving away t-shirts. For free. That's right, free.

We’ll be counting down the most popular “Smaller. Smarter.” commercials of all time at noon Tuesday, Oct. 18, in Martin Hall. Anyone who attends the countdown will receive a free Texas Wesleyan t-shirt (while supplies and sizes last) after the viewing. See the “Smaller. Smarter.” countdown, get a free t-shirt. It's that simple.

We're only crowning one commercial — don’t miss your chance to vote! You don’t have to vote to receive a free t-shirt, but why miss this opportunity?

Cast your vote online for your favorite commercial before Oct. 17 (we’ve posted the campaigns online).

We’re also going to give you an opportunity to suggest your own “Smaller. Smarter.” billboard line – we’ll read the best (and funniest) at the event and you may even see your idea on a billboard. So, vote now and pick your favorite.