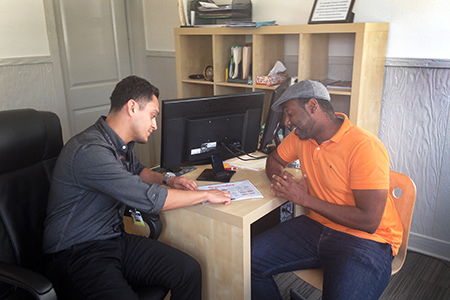 Diversity and a global outlook have always been hallmarks of a Texas Wesleyan education, and now even more international students needing language training can be served on campus after The Language Company (TLC) moved into new offices in August.

Formerly housed in 12 rooms in Stella Russell Hall, TLC moved into three renovated buildings that were used for art classes for many years: Boyd House, Art North and the Art Annex. The space in Stella Hall reverted to dorm rooms.

TLC, an English as a Second Language training program based in Edmond, Okla., has been on campus since 2012. Their new facilities provide more classrooms, faculty offices, student and teacher lounges and an outdoor picnic area.

TLC Director Ines Zhang says the students are thrilled with all the light in the new rooms and she is most excited about the additional square footage they have now.

"The University was so generous to give us so much space," she says. "We are so pleased with our new location and look forward to continuing to grow with Texas Wesleyan."

TLC has learning centers at 15 universities in the U.S. The program at Texas Wesleyan is among the most diverse, says Zhang, hosting between 25 and 50 students each month from 15 countries in Asia, the Middle East, South America and Europe.

The goal of the program, which can take up to nine months, is to prepare non-English speakers for the rigors of a college education, says Zhang.

"Most of them are just out of high school and need to enroll in an English program before attending college in U.S.," she says. "We are open to wide age range, and some are preparing to get into master’s programs. A few come just for personal enrichment."

The University has set aside eight residence rooms for TLC students, but most commute to campus. There is also a host family program that allows local residents to house the students while they are in the program.

Not all the students enroll at Texas Wesleyan when they finish their studies, but many do, Zhang says. "We encourage them to come to Wesleyan, but depending on their individual academic or professional goals, some go out of state, some return home."

Zhang said the move was much easier than she anticipated.

"It’s been a great pleasure to work with facilities and other departments on campus," she says. "They really made our move very easy and did a great job accommodating our requests. So I am very thankful to the university and all the people who helped during the move."

For more on TLC, go to www.thelanguagecompany.com.