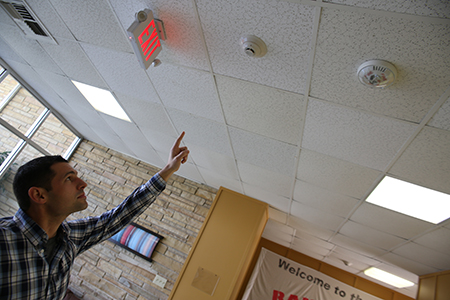 Facilities director Brian Franks points to new fire monitoring devices in Stella Hall. The project is expected to be complete by early summer.

"This campus improvement brought to you by Texas Wesleyan," say signs near new benches, sidewalks and landscaping around campus — but not all of the ongoing improvements can be seen and heard.

This latest campus update from facilities director Brian Franks offers an in-depth look at a few of the new safety enhancements around campus.

"There is a lot of work going on behind the scenes," Franks said. "In addition to campus beautification, we are moving quickly to address priority safety issues like electrical upgrades, fire safety and other projects to make our campus a better place."

Franks said that electrical upgrades are well underway at Elizabeth and O.C. Halls.

Thanks to a generous donation from the Armstrong Foundation, the dorms are getting a new circuit system that will provide stronger electric strength and safer plugs.

In Stella Hall, the fire monitoring system is being upgraded and replaced. The same was done in Elizabeth and O.C. Halls over the winter break.

Franks noted that every building on campus is up to fire code safety standards and is checked monthly.

Elevator upgrades on the way

In particular, Franks said that there is a lot of work going on behind the scenes with several buildings' elevators. While all elevators on campus are working with current inspections on file, it is well known that many of the elevators in older buildings need improvement.

"Now through the summer we will be overhauling mechanics in the elevators located in the Poly United Methodist Church, the West Library, the Oneal-Sells building and McFadden," Franks explained. "Most improvements are taking place on the inside and not visible to passers-by. However, the elevator in Oneal-Sells will get a new cab this summer."

Now through the end of the semester, look for Brian Franks' update every Tuesday in the Wesleyan Flame newsletter and online. Coming up next week: security upgrades and how the improvement projects will enhance security and surveillance on campus.

Have a suggestion for campus improvements that is not an immediate work order? Submit your ideas to Brian on the campus facilities feedback page.