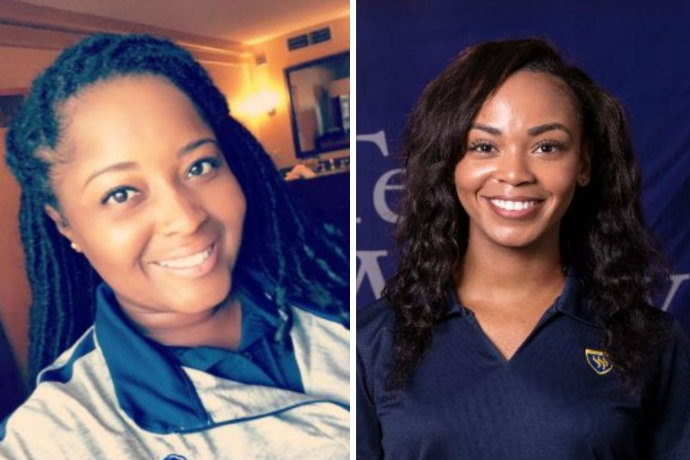 Ongelic Hill '16, enrollment counselor and Rambassador tour guide manager at Texas Wesleyan was one of two staff members to receive the Staff Hero Award at the 2020 Town Hall meeting on Wednesday, Oct. 17 for her support of the 2020 Vision goals.

Hill was recruited out of high school for the TXWES track team, but running wasn’t her favorite thing about college. “My favorite thing about TXWES was the genuine support from my professors,” Hill said. “To this day, I can still shoot my former profs a text and catch up. One has even offered to ordain my marriage!”

In the two years that Hill has worked at Wesleyan, she has enjoyed the support of her co-workers the most. “They manage to make me still want to hang out with them outside of the 40-hour work week,” she said. “We are like family, and I know I can count on them.”

Also honored was Dominique Brown, lead athletic trainer for the TXWES football team. Brown and her team recently activated their emergency action plan to save the life of a football student-athlete who was experiencing severe heat illness.

Athletic trainers like Dominique play a critical role in ensuring our athletes are safe.

"Honestly, I DID NOT see it coming! I thought I was attending the President's Town Hall in support of our Athletic Training Education Program and students,” said Brown. “I didn't even know anything about the Staff Hero Award, so I had no idea that I had been nominated. I'm sure my facial expression was priceless! I'm appreciative and thankful to those involved in nominating me for this award--those who thought my actions on that day were ‘hero’ worthy. I'm humbled and honored to be a Staff Hero Award recipient! Thank you!"

About the Staff Hero Award

The Staff Hero Award was created in 2015 as a way to honor staff members who go above and beyond to support the University’s 2020 Vision strategic plan. The Staff Hero is presented by President Frederick G. Slabach during 2020 Town Hall Meetings.