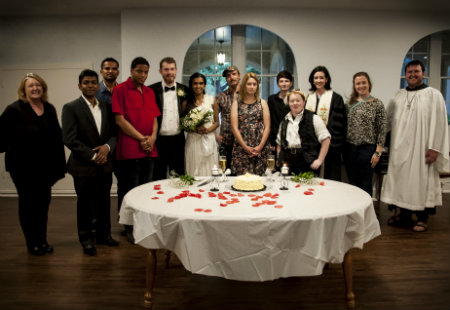 ‌On Thursday, May 11, an impromptu wedding was held in the Chapel of the Polytechnic United Methodist Church on the Texas Wesleyan campus. Current students, Sandaru Ekanayaka Hirunika (Hiru) and Dylan Luster secretly eloped over the Christmas break. The pair had planned to fly to Sri Lanka, Hiru's home, for the official church wedding ceremony later on in the year when the plans changed and they realized that was not going to be a possibility. While Hiru's mom knew of the elopement, she was most insistent the couple have a church wedding.

"The couple came into my office and asked about wedding possibilities before the school term was out," Gladys Childs, the university chaplain, said. "I told them I was happy to do a wedding but, I would be at a conference the following week." Looking at the schedule and working around finals, they decided to have the ceremony a week and a half later at 6 p.m. on May 11. 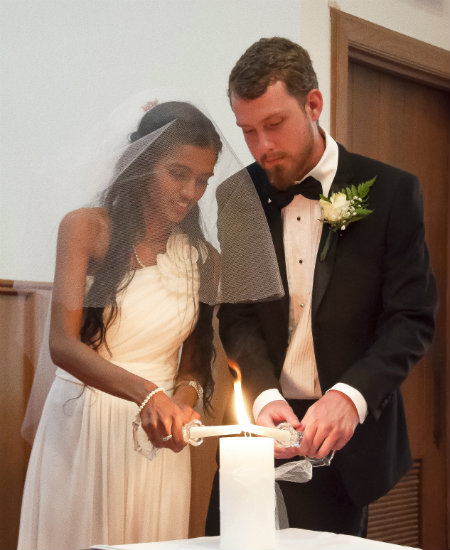 The day before the wedding Hiru and Dylan visited the chaplain and discussed the wedding. There was no dress, flowers or photographer. Childs told Hiru to just wear something she felt pretty in and that she would take pictures. However, the next morning, Childs was having doubts and was hoping to make the occasion more special for the couple.

"I called my assistant, Shelby Nowland, and told him there was going to be a wedding that night at 6 p.m.," Childs said.

Nowland called TXWES alumna and former religion major, Lori King-Nelson, who got the ball rolling. Within a couple of hours, King-Nelson had a wedding cake bought, champagne goblets to serve sparkling apple cider and rose petals to throw as the couple departed. King-Nelson also personally made the bride her bouquet and found a Texas Wesleyan student, Cassandra Lee Dunlap, who would miss one of her own graduation events to photograph the wedding free of charge.

"I was blown away by the generosity of our students and alumni who came together at the last minute to not only show up to the wedding, but to ensure there was a photographer and a reception," stated Childs.

"Students majoring in religion, biology and liberal studies showed up along with faculty and staff. This is what makes Texas Wesleyan special, the care and concern that we have for one another, even people we don't personally know."

While everything was ready for the 6 p.m. start, Lester had to stay late at his new job. The couple didn't arrived until 7:30 p.m. for the wedding but, everyone still stayed and celebrated.

Pam Rast, Ph.D., who attended the wedding, said, "This is what Texas Wesleyan is all about. Instead of 'Smaller. Smarter.', it is 'Smaller. Sweeter.'"