Stop by the ASC and enter the candy hearts contest 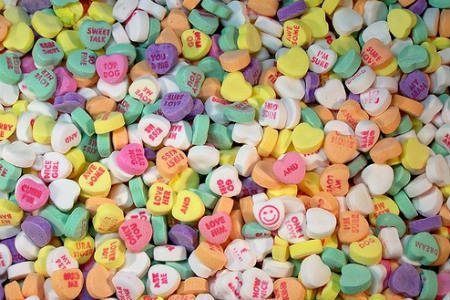 Valentine's Day is near. The conversation hearts are out in the stores. We have plenty to say about the holiday in the Academic Success Center.

Come by the ASC and take a guess at how many candy hearts are in the jar. The closest guess will win a Valentine's goodie bag. The contest runs through Feb. 13 at 5 p.m.

Did you know that approximately 8 billion candy conversation hearts are produced each year?

In 1847, David Chase discovered how to print messages directly onto the candy hearts. The messages on the candy heart remained the same each year. In 1990, the sayings were updated to include messages like "Fax Me" and  "Email Me."

The company asked the American public to participate in an online survey to decide which phrases would appear on the hearts in 2010. Some of the winners included: "Tweet Me," Text Me," and  "You Rock." New flavors were also added that year.