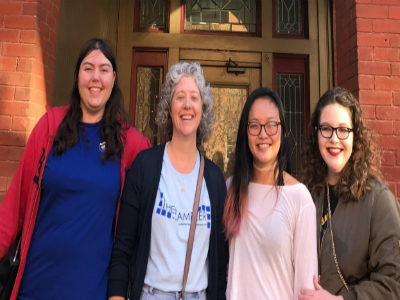 The director of Rambler TV, Tina Huynh, also won the Frank W. Buckley Scholarship, which is for $400. Students must attend four-year universities, have a GPA over 3.0 and display an excellence in journalism to be eligible for the scholarship.

Huynh was not expecting to win the scholarship and was completely taken aback when she heard her name called.

“Before they announced the scholarship I was talking with Hannah Onder, and I was saying I wouldn’t have a chance at winning,” Huynh said. “Right after that I heard my name and couldn’t believe it.”

Huynh is excited that she won the scholarship.

“I am beyond honored and thankful toward TIPA for awarding me the scholarship,” Huynh said. “It means a lot to me and my family, and it motivates me to do better.”

Several of the winning entries from this year’s competition were produced in Mass Communication classes. Dr. Kay L. Colley, department chair and Rambler Media Group director, was very excited about this development.

“We are lucky to have so many gifted students in our classes,” Dr. Colley said. “We know that, and now, all of Texas knows that as well.