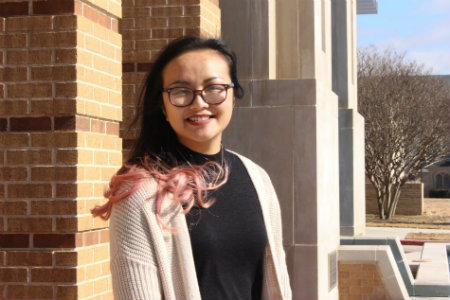 Tina Huynh, a sophomore mass communication major, was awarded the Joe Holstead Gridiron Scholarship awarded from the Fort Worth Pro Chapter of the Society of Professional Journalists in late March.

The $1000 scholarship is given to students who attend a four-year university and have a minimum 2.25 GPA.

“SPJ has a lot of scholarships they award each year,” Huynh said. “I chose the Joel Holstead one because it is given to students who have an interest in broadcast journalism.”

Huynh was surprised that she won the award because it was supposed to be awarded last December.

“After December, I thought that I just didn’t receive the scholarship and it was given to someone else,” she said. “I was shaken when I received the email and was speechless.”

Huynh is from Dalat, Vietnam and has a passion for photography and videography. Currently, she is the director of Rambler TV, Rambler Media Group’s student television channel, available at Channel 25.1 and YouTube at thetwurambler.

“My team and I work hard to create content for Rambler TV because it is our passion to make great videos,” she said. “Winning the scholarship means a lot to me, and it will allow me to create great videos in the future.”

This is the second scholarship Huynh has received since March. She was also awarded the Frank Buckley Scholarship at the Texas Intercollegiate Press Association Conference March 21-24.