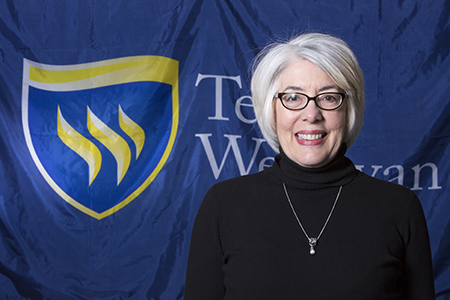 Julie McCoy, associate professor of music at Texas Wesleyan University, is part of the choral ensemble that won in the Best Choral Performance category at the 57th annual Grammy Awards on Feb. 8.

The Conspirare Chamber Choir, based in Austin and with whom McCoy has performed and recorded since 2007, won its first Grammy for the CD titled The Sacred Spirit of Russia, recorded on the Harmonia Mundi label.

McCoy performed as a soloist on The Beatitudes, track four of the CD.

"What I'm most proud of, and find most exciting, is that one of my former students [from OSU] was on the recording as well," said McCoy. "It is extremely rewarding to watch your students succeed."

McCoy watched the Grammys streaming live from her computer at home.

"I was watching the afternoon ceremony and wasn't really sure I'd heard correctly until my husband shouted in excitement," McCoy said. "I could hardly breathe!"

Conspirare, the professional vocal ensemble of 43 that performs The Sacred Spirit of Russia, was conducted by artistic director Craig Hella Johnson. Johnson was at the Grammy ceremony to receive the award. This is his first Grammy as well.

"It was a great thrill to see our conductor and founder [Johnson] accept the award he and Conspirare so richly deserve," McCoy said.

McCoy is also connected to the Grammys through her membership with The Recording Academy, the voting body for the Grammy Awards. Members vote in their areas of expertise, plus the four major categories of the General Field (Record Of The Year, Album Of The Year, Song Of The Year and Best New Artist.)

"My next scheduled time with Conspirare will be next spring when we'll perform and record Considering Matthew Shepard, a new piece by Johnson," McCoy said. "Until then, I will be highly engaged with my Texas Wesleyan music students."

At the invitation of the U.S. State Department, McCoy and pianist Cynthia Cortright served as Artistic Ambassadors in a four-week tour to Israel, Jordan, Oman, Saudi Arabia and Syria.

As a member of Conspirare Chamber Choir, she sang as a soloist on the 2014 Grammy-winning recording Sacred Spirit of Russia. She also performed on Conspirare's 2009 double-Grammy-nominated recording Threshold of Night, and the 2012 recording Barber: American Romantic. She is featured on a soon-to-be-released recording of music set to poems by Pablo Neruda.

As a member and soloist, McCoy performed and recorded with the Robert Shaw Festival Singers in France and New York City for nine years.