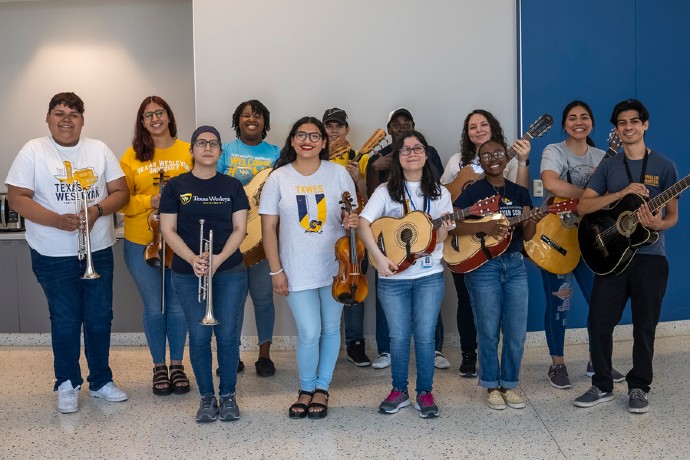 Mariachi Oro Azul, which translates to Mariachi Gold Blue, the University’s colors, is the music department’s first ever mariachi program. This fall, students were able to register for a class to learn the history and technique of mariachi music and play in the ensemble. This makes TXWES one of the few universities to offer college-level mariachi courses in North Texas.

The idea for a mariachi program on campus started in the early 1990’s with former Spanish professor Noe’ Flores and Dr. Ricardo Rodriguez, who is now the dean of the School of Arts & Sciences. Flores had connected Rodriguez with directors of mariachi programs in schools around North Texas.

When Rodriguez became dean in 2016, he started working with the Upward Bound program, which introduced him to a Mariachi festival where Fort Worth ISD middle and high school groups played.

“I was just amazed at the amount of talent those kids had and the quality of music those kids were playing,” he said. “I saw this as a venue for all these mariachi kids who want to play music and get an education to come to Texas Wesleyan.”

Rodriguez then worked with TXWES music professors and staff to help provide funding and resources to start a mariachi program, including instruments and uniforms for the students. Faculty and staff promoted the program to local schools, leading to 11 students joining the program this year.

“I feel like we accomplished something where we’re fulfilling the mission of the University,” he said. “It’s a way to get kids here so they can continue their education and continue to enjoy their music. It strengthens their own views of themselves and their culture. You can still play your music and be a scientist, be a teacher or an athlete.”

Professor of Music Dr. Ilka Araujo believes that by bringing mariachi to Texas Wesleyan, the University is providing a more “at home” feel for many students that grew up listening to mariachi.

“Our hope with this is that this will help Hispanic students feel more at home,” she said. “Music is a way we can speak the same language, and mariachi is something that culturally will make them feel more welcome and part of the University.”

And that’s exactly what freshman trumpet player and vocalist Patricio Izaguirre was looking for when he came to Texas Wesleyan — a sense of community by going to a smaller school that could focus on him and his interests.

“Middle school and beginning of high school, I didn’t really tap into my culture a lot. I tried to hide it away,” he said. “But once I got older and started experiencing more with my culture, I loved it. I was trying to branch into Mexican music, and I felt a sense of community here.”

But the group isn’t just for people who already know mariachi. It’s a way for all students to immerse themselves in the Hispanic culture and learn a new type of music.

“Music can actually unify all people, all cultures,” Araujo said. “It’s an opportunity to educate not just people who grew up with this music. We can globally have a little more awareness, knowledge and culture — that is extremely valuable.”

For freshman business management major Gabrielle Little, joining mariachi was a way for her to get involved in the music program, especially since she is minoring in vocal music.

“At first, I was like, ‘I don’t want to be in this because I don’t know anything,’” she said. “But it’s taught me that really the only way to learn different genres of music is to have those connections.”

Under the guidance of Mr. Ramon Nino, director of the band, many students have gone from never holding an instrument before to learning two new songs and playing new chords in just a few weeks.

In fact, Little had never played an instrument before but is now learning the vihuela as part of the band.

“This is the place to be. [The program] is going to treat you like family and accept you,” she said. “I’ve never played an instrument in my life, and I can already play two songs in two weeks of practice.”

Izaguirre says that Nino and the students work well together, which makes it easy and fun to be a part of the program.

“We’ve had so much growth in two to three weeks,” Izaguirre said. “I’m excited. Every day I go, I’m like ‘What are we going to learn now?’”

The mariachi group may have just started at Texas Wesleyan, but it’s already making a profound difference in the lives of students. And the vision is to have it spread even more into the Fort Worth community.

“This is only the tip of the iceberg,” Rodriguez said. “I want Texas Wesleyan to be a showcase for accepting students for the way they are, and have the students serve the community and bring joy to those who need joy.”