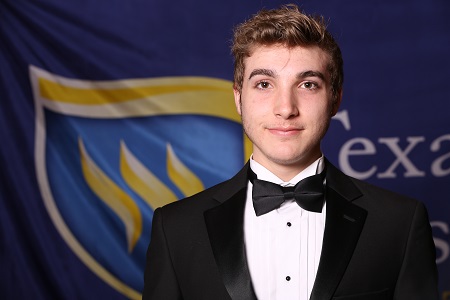 Alan Michael Whetsel Setford has just been awarded the prestigious Clara Freshour Nelson Scholarship sponsored by the Texas Association of Music Schools.  Alan Michael is a sophomore vocal Music Education major.  In order to qualify to receive this honor, Alan Michael had to submit an essay describing his musical ambitions and goals.  In addition, he had to submit a recording of various vocal selections.  His essay along with his recorded performance was judged by a panel and compared against other students from across Texas who attend 4-year private universities.  His selection for this honor sets him apart as one of the very best music students, both vocal and instrumental, in the state of Texas.  This scholarship is an award of $6,000 per year for the next three years, for a total award of $18,000. He is the first student from Texas Wesleyan University to receive this award.

Michael studies voice with professor Julie McCoy.  He is a member of the Wesleyan Men’s Chorus, Wesleyan Chamber Singers, Wesleyan Chorale, and sings in Opera Workshop.  Congratulations to Alan Michael, his family and his teachers for this outstanding accomplishment!