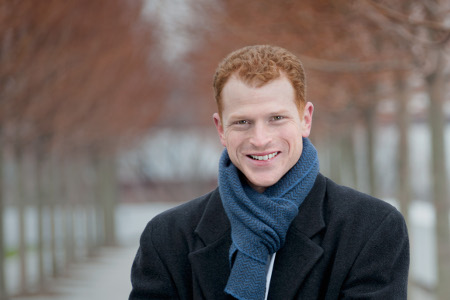 The Department of Music will welcome Andrew Garland and Christopher Cano, nationally acclaimed musicians, to perform their recital The Quest: Don Quixote and Other Wanderers, including music by Vaughn Williams, Schubert, Ravel, and others. The concert will be free and open to the public and will be performed on 7:30 p.m. Friday, Oct. 21 in Martin Hall. There is a reception to follow in Lou's Place.

Andrew Garland is widely recognized as a leader in recital work with dozens of performances around the country including Carnegie Hall with Warren Jones and programs of modern American songs all over the United States and in Canada. Mr. Jones, Marilyn Horne, Steven Blier and a number of American composers and major music publications all endorse him as a highly communicative singer leading the way for the song recital in the 21st Century.

His latest solo CD American Portraits (with Donna Loewy, piano) went to #1 on Amazon classical. Garland has four other recordings on the Telarc, Naxos, GPR and Azica Labels.

Garland has studied at the Steans Institute and is a graduate of the University of Massachusetts at Amherst and the Cincinnati College-Conservatory of Music. His teachers and coaches have included Paulina Stark, Jon Humphrey, Oren Brown, William McGraw, Penelope Bitzas, Elizabeth Mannion, Martin Katz, Margo Garrett, Steven Blier, Donna Loewy, Kenneth Griffiths and Terry Lusk.

A seasoned recitalist and orchestra soloist, pianist Christopher Cano has performed in Europe, across the US, Mexico, Israel and the Far East.

Mr. Cano has performed as a guest soloist and chamber musician at the Killington Music Festival in Vermont, the Alamos Music Festival of Sonora, Mexico, and has participated and performed with the International Vocal Arts Institute in Tel Aviv, Israel and Blacksburg, Virginia. Mr. Cano has been a member of the music staff at the Festival Lyrique en Mer in Belle Isle, France, Toledo Opera, San Diego Opera, Utah Festival Opera, Opera Company of North Carolina, Florida Grand Opera, Opera Saratoga, Boston Lyric Opera and Opera Theatre of Saint Louis. Mr. Cano has served on the faculties of The Intermezzo Music Festival, Manhattan School of Music Summer Voice Institute, and V.O.I.C.Experience, a summer program for promising young singers in New York City and Savannah under the artistic direction of renowned baritone Sherrill Milnes.

Mr. Cano and his wife, mezzo-soprano Jennifer Johnson Cano, currently reside in New York City where he was a full-scholarship student in the professional studies program of vocal accompanying at the Manhattan School of Music. He currently serves on the vocal coaching faculty of that institution where he was a student of renowned pianist Warren Jones.