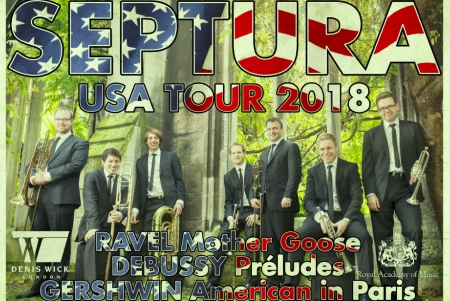 The Department of Music presents a concert funded by the Friends of Wesleyan Music, featuring London-based brass ensemble Septura Brass, at 7:30 p.m. on Feb. 1 in Nicholas Martin Hall.

The concert is $15 for the general public and $5 for students with ID. Seating is general admission.

Septura brings together London’s leading players to redefine brass chamber music through the uniquely expressive sound of the brass septet.

By creating a canon of transcriptions, arrangements and new commissions for this brand new classical configuration, Septura aims to re-cast the brass ensemble as a serious artistic medium.

Currently Ensemble in Residence at the Royal Academy of Music, London, the group is recording a series of 10 discs for Naxos Records, each focused on a particular period, genre and set of composers, creating a ‘counter-factual history’ of brass chamber music.

Weaving this ever-increasing repertoire into captivating live events, Septura is gaining a reputation for engaging audiences with innovative and imaginative programming. Following recent performances at the Cheltenham and Chipping Campden festivals, and Kings Place, London, in the 17-18 season Septura launch their debut concert series, Kleptomania, at St John’s Smith Square, London and West Road Concert Hall, Cambridge; they will also tour Switzerland, Germany and the USA.