Department of Music presents a gender-swapping evening of vocal music 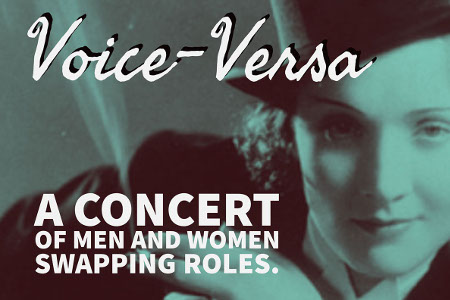 The Texas Wesleyan Music Department will present their first-ever, student-run production of "Voice Versa" at 7:30 p.m. on Sept. 14 in Nicholas Martin Hall. Admission is free and open to the public. Donations will be accepted for Hurrican Harvey disaster relief.

What is the "Voice Versa" concert?

Voice Versa began as an idea by music students Daniel Hernandez and Mary Grim to shake gender expectations while also challenging Texas Wesleyan music students to step out of their comfort zone. The faculty of the department quickly agreed, and auditions were held in April for the concert.

This is the first time in recent history that the Department of Music will attempt a student-run production. The students hope to make this new event an annual tradition.

"Every vocal performer has at one time wanted to perform a song normally sung by the opposite gender. Daniel and I had the idea to challenge ourselves and others to sing a 'Voice Versa' and we've been working since then to make that dream a reality," Grim said.