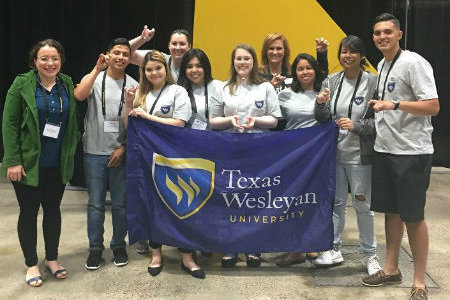 The Texas Wesleyan Enactus team returned from the national expo competition in Kansas City with accolades. The team competed after advancing from the Regional competition in Plano, Texas, in April. There were approximately 104 teams competing in at the National Expo with only one team named as US Champion to advance to the World Cup in London, England. The team competed early Monday morning of the competition but did not advance as a semifinalist.

During the academic year 2016-2017, students worked on three projects. They engaged in a thorough needs analysis after first identifying a social issue they were passionate about. Work on each project began with research on the topic followed by the creation of a business plan to solve the social issue via a sustainable solution.

Enactus offers many experiences for students to showcase their projects by presenting them at a regional competition in the spring. The top teams from each of the six regionals advance to the national competition. This is the second year for the Enactus Texas Wesleyan team to compete.

This year the Women Entrepreneurship project applied to the Coca Cola Uncap Opportunities for Women grant and brought home the Grand Prize trophy and $7,500 to help advance this women entrepreneur project.