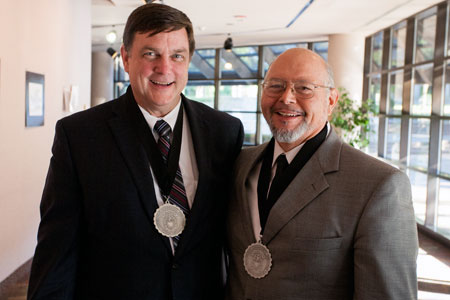 Ricardo E. Rodriguez, Ph.D., associate DNAP director, interim dean of the School of Natural and Social Sciences and professor of chemistry, was inducted to the McLennan Community College (MCC) Hall of Fame as part of the institution's 50th anniversary celebration on Saturday, Oct. 10. 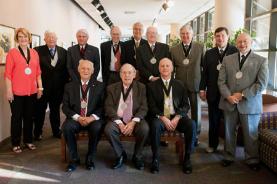 The ceremony took place at the Wilbur Performing Arts Center on the MCC campus.

Rodriguez, who attended MCC as a pre-engineering student before transferring to Baylor University, is one of 28 honorees selected for the inaugural induction class out of 76 nominees.

Selection to the newly established Hall is one of the highest honors MCC can bestow upon alumni, current or former faculty, staff and administrators or friends of the college.

Rodriguez couldn't believe it when he learned he was receiving the honor.

"I was floored," said Rodriguez. "I was very humbled that MCC thought I'd done well enough in my career to be included with this prestigious group of honorees."

A career worthy of honor

Rodriguez, who joined Texas Wesleyan in 1990 teaching chemistry as a member of the Graduate Programs on Nurse Anesthesia (GPNA) faculty, has a career marked by leadership in research and education.

After earning a B.S. in chemistry from Baylor University and a Ph.D. in inorganic chemistry from Texas Christian University, he completed three years of post-doctoral studies at the National Institues of Health - National Cancer Institute.

His research interests focus on biophysical-inorganic reaction kinetics and mechanisms involving porphyrin systems, protein structure and degradation. He also has an interest in science, technology, math and engineering (STEM) education and the chemistry of anesthetic drugs.

Rodriguez has also been instrumental in the growth of the Doctorate of Nurse Anesthesia Practice program at Texas Wesleyan, which is one of only four 100 percent online DNAP programs in the nation.

"Dr. Rodriguez's leadership has been an invaluable asset," said Debra Maloy, CRNA, MHS, Ed.D., GPNA program director. "We're thrilled that he's been recognized by another institution for his contributions and accomplishments."