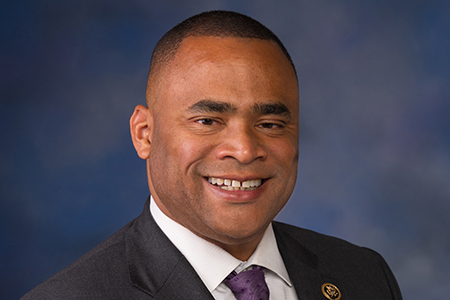 Congressman Marc Veasey ’95 will be the keynote speaker for Texas Wesleyan University’s Fall Commencement Ceremony at 10 a.m. Saturday, December 16, in the MacGorman Chapel at Southwestern Baptist Theological Seminary in Fort Worth.

Philanthropists Paul and Judy Andrews will be recognized with honorary degrees.

The Fall Commencement Ceremony will stream live on txwes.edu/live at 10 a.m. on Saturday, Dec. 16.

Congratulations to the Class of 2017!

United States Congressman Marc Veasey proudly represents Texas’ newly drawn Congressional District 33 in the U.S. House of Representatives. Rep. Veasey comes to Congress with over a decade of public service experience and has established himself as a strong and effective advocate who finds fair-minded and balanced solutions to problems.

First elected to the Texas State House in 2004, Congressman Veasey represented District 95 – an area now part of the 33rd Congressional District – for four consecutive terms. As a member of the Texas State House, Rep. Veasey served in a number of leadership positions including Democratic Whip and Chair of the Democratic Caucus. At home, he earned a reputation for his strong voice in the state legislature, fighting for good jobs, good schools, affordable healthcare, voting rights and justice for all Texans.

As a Member of the U.S. House of Representatives, Rep. Veasey serves on the House Armed Services Committee and the Science, Space and Technology Committee. With over 15 major military installations in Texas, defense and scientific research and development are key industries in the 33rd District. In the 114th Congress, Rep. Veasey proudly accepted his appointment by U.S House Democratic Minority Whip, Steny Hoyer, MD-5, to serve as an Assistant Whip and Regional Whip. In May 2016, Congressman Veasey launched the first Congressional Voting Rights Caucus to address the immediate need to overcome the barriers our communities face when exercising their right to vote. In December 2016, Congressman Veasey co-launched the Blue Collar Caucus to focus Congressional efforts on alleviating the economic anxiety felt by working-class Americans.

Congressman Veasey was born and raised in Fort Worth, Texas. He and his wife Tonya live in the Metroplex area and have an eleven-year-old son, Adam. Rep. Veasey earned a bachelor's degree from Texas Wesleyan University, where he majored in mass communication.

About Paul and Judy Andrews

Paul and Judy Andrews are philanthropists who have earned a reputation for underwriting transformations.

Paul Andrews is the founder and CEO of TTI, an electronic components distributor. In 2007, TTI became part of the Berkshire Hathaway family of companies. Mr. Andrews was the recipient of the Fort Worth Business Hall of Fame Award in 2011.

Judy Andrews is a Fort Worth native. She has been demonstrating her love and commitment to her hometown by supporting its growth through philanthropic endeavors. Mrs. Andrews played an integral part in establishing the Paul and Judy Andrews Women’s Hospital at Baylor All Saints Medical Center in 2005. She served as a member of the hospital’s board of directors.

Mr. and Mrs. Andrews support institutions of education and healthcare in Fort Worth and in Texas. In addition to the Paul and Judy Andrews Women’s Hospital at Baylor All Saints Medical Center in Fort Worth, they established the Paul and Judy Andrews Industrial Distribution Conference Center at Texas A&M University, and The Andrews Institute of Mathematics & Science Education in TCU.

Mr. and Mrs. Andrews have made significant financial commitments to Texas Wesleyan. They first began supporting the University in 1996 with a gift to support the chemistry camp. They have been sponsors of the Business Hall of Fame since 2011.