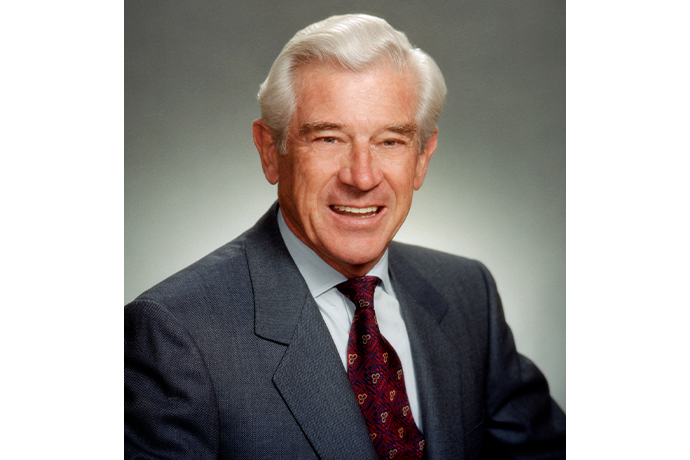 Frank X. Buhler, a prominent business and community leader, will posthumously receive an honorary doctorate degree at Spring Commencement on Saturday, May 18, in recognition of his legacy of business leadership and philanthropy, particularly through his generous support of Texas Wesleyan University. David Buhler will accept the award on behalf of his father.

Frank X. Buhler was born in Switzerland in 1926 and was 19 when he left for France to further his international business and language studies. In 1949, he pursued his life-long dream of moving to the United States and arrived in New York City, where he enrolled at Columbia University, taking evening classes while working at the Waldorf Astoria Hotel during the day. While on vacation in Mexico, Buhler met Jean Boyd, whom he would marry in 1953.

His career led him to various management positions in pharmaceuticals in Argentina and the Caribbean. After several years at Chicago’s Abbott Laboratories, he joined Alcon Laboratories in Fort Worth in 1962, spending his career developing its international division. He retired from Alcon in 1983 but took on new challenges with private pharmaceutical acquisitions until 2002.

When Buhler was considering organizations and individuals he could support with his financial success, he sought institutions that had the ability to help others like him: immigrants and other underserved populations. Although he had no direct connection to Texas Wesleyan, other than fellow Alcon executives George Leone and Ed Schollmaier, Buhler felt deeply connected to the university’s mission.

In 2010, Buhler honored Texas Wesleyan with an endowed scholarship, one of the largest scholarship endowments at the University, for business students and provided funding for land acquisitions and capital improvements; both gifts coming at critical moments during the revitalization of campus.

Although Buhler passed away in 2014, his legacy of supporting Texas Wesleyan lives on. His children made a leadership gift from Frank Buhler’s trust in support of the new Nick and Lou Martin University Center for its importance to student engagement and supporting students as they persist to graduation.