Don’t strike out by not signing up for the Ram Sports: Then and Now event 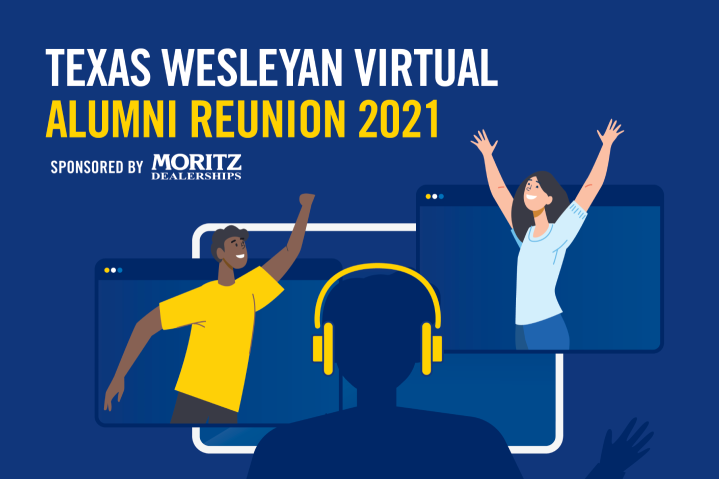 Be sure to tune in on Thursday, April 22nd for the Virtual Alumni Reunion — Ram Sports: Then and Now event!

Join us on Zoom at 7 p.m. for a conversation about the athletics program at TXWES. We will be exploring some of the program’s history, as well as looking to the future of Ram sports.

Hear from our host, women’s soccer coach Josh Gibbs ’03, as he facilitates engaging discussions with athletics staff members. It will be a fun time to not only reminisce with classmates but ask questions to our athletics department.

Make sure you register for the FREE Ram Sports event at txwes.edu/reunion so that you don’t miss out!

Are you curious about who our esteemed guests from the athletics department will be? Here’s a sneak peek into who you can expect to hear from at this event during Alumni Reunion week.

Josh Gibbs ’03 is the women’s soccer coach and director of athletic advancement, and will also be our moderator for our Ram Sports event. To Josh, Wesleyan is home. He started at Wesleyan as a soccer player in 1999, and since then, it has been a special place for him. 15 years into his coaching career at Wesleyan, he has seen incredible growth and change in the University. Josh is very proud of how TXWES has grown and developed while staying true to the University’s roots: smaller classes, focused instruction and providing the perfect environment for critical thinking.

Ricky Dotson is in his third season as Athletic Director and his ninth year at TXWES. In his first two seasons as Athletic Director, the department won National Championships in men's golf and table tennis, while making national tournament appearances in baseball, men's basketball, cheerleading, cross country, women's golf, track & field, volleyball, as well as men and women's wrestling.

Brennan Shingleton '05 is entering his ninth season (2020-2021) as the head coach of the men's basketball coach at Texas Wesleyan. Previous to his tenure as head coach, he held the position as an assistant coach and later associate head coach for ten years. Shingleton holds an overall record of 160-94 (.630). He reached 100 wins during the team’s National Championship run in 2017, making him the fastest coach to reach the milestone in the history of the program, and is currently tied with the great Elmer Hanebutt for second on the school's all-time wins list. Shingleton was named Sooner Athletic Conference Coach of the Year in 2016 and 2017 while leading the Rams to three consecutive regular-season conference championships in 2016, 2017 and 2018. He was also named NAIA National Coach of the Year while leading the Rams to their second national title in 2017.

Bobby Cornett ‘72 is entering his 35th season as a men's golf coach at Texas Wesleyan. The Hall of Fame coach led the Rams from 1985-99 as head coach, then served ten seasons as an assistant coach while focusing on the National Senior Tour and Senior PGA Tour before returning to his role as head coach prior to the 2009-10 season. Cornett is a member of the Texas Wesleyan Athletic Hall of Fame ('86), the Golf Coaches Association of America Hall of Fame ('10), and the NAIA Hall of Fame ('12).  He has been named NAIA National Coach of the Year four times while leading the team to National Championships in 1990, 1995, 1999 and 2019.

Ray Bedford enters his second season as head wrestling coach (2020-21) after being tasked with the program's creation beginning in February 2019. Bedford got the Texas Wesleyan Wrestling program off to a dynamic start as the men and women's teams combined for six victories in 2019-20. He came to Texas Wesleyan with extensive experience in coaching, mentoring and leading both men's and women's wrestling programs. He is the founder of Spartan Mat Club, one of the largest elite high school clubs in Texas, specializing in preparing high school athletes for national and international wrestling programs.

Thank you to Moritz Dealerships for sponsoring the TXWES Alumni Reunion 2021.