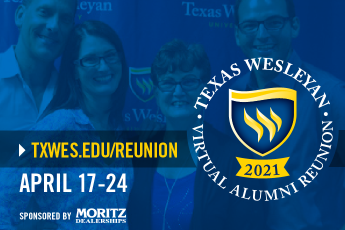 Don’t miss out on the Alumni Reunion Week — Friday Night Live event for an evening of laughter, entertainment and amazement!

Taking place over Zoom on Friday, April 23rd at 7 p.m., the evening’s show will feature comedians, a magician, and plenty of fun for the whole family! It will be a light-hearted and interactive way to close out the work week and kick off the festivities of the weekend.

If you love to be entertained and be amazed, register at txwes.edu/reunion for this FREE event!

Our Friday Night Live event will feature the incredible talents of:

Aaron Aryanpur was voted the Funniest Comic in Texas in 2012 and has appeared in comedy clubs, theaters, and colleges across the country. While making his national TV debut on FOX’s Laughs, Aaron was also a Semifinalist in Comedy Central’s Up Next Talent Search and NBC’s Stand Up for Diversity. Heard on the Minivan Men podcast with fellow funny dads Maz Jobrani (Curb Your Enthusiasm) and Al Madrigal (The Daily Show), Aaron was also featured on Comedy Central Radio. With nearly two decades of experience on stage and a background that includes writing, improvisation and voice-over, Aaron delivers with his unique perspective and likable delivery. You won’t want to miss his Friday Night Live performance at Alumni Reunion week!

Mike Ince ‘99 is an entertainer, first and foremost. A lifelong student of magic and theater, he aims to explore the hidden universe inside your head. Mike blends suggestion, magic, and mind-games to create fun and convincing illusions of thought-reading ... and sometimes mind-control. A Texas Wesleyan University graduate with a Bachelors in Mass Comm. (R/TV, 1999), Mike enjoyed studying the Arts and Humanities, laughing with friends from the ESL program, and writing assignments after midnight.

Damon Sumner has been bringing laughter to people’s lives even before he held a mic on a stage. He has continued to hone his craft and every time he touches the stage, as he delivers hilarious stories about his upbringing, and witty, high-energy observations of everyday life. Since starting standup in Atlanta, Damon has shared the stage with numerous headliners, like Iliza, Brent Morin, Todd Glass, Sarah Tiana, George Wallace, and so many more. He can be seen on The Weather Channel’s “Weather Gone Viral”, EPIX’s “Unprotected Sets", and heard on Sirius XM. He co-hosts the hilarious podcast, “Forth and Ten”, created the YouTube Channel “BETTER DAD” and runs shows all-around the ATL. In 2012, Damon toured China for a year and was a part of the team that opened the first full-time mainland comedy club in China, Kungfu Comedy Club. Damon has also performed in illustrious comedy festivals around the U.S. including the Dallas Comedy Festival, Laugh Your Asheville Off Comedy Festival, Out Of Bounds Comedy Festival, Hell Yes Comedy Festival and was a semi-finalist for the American Black Film Festival's Comedy Wings Competition, sponsored by HBO.

Thank you to Moritz Dealerships for sponsoring the TXWES Alumni Reunion 2021.