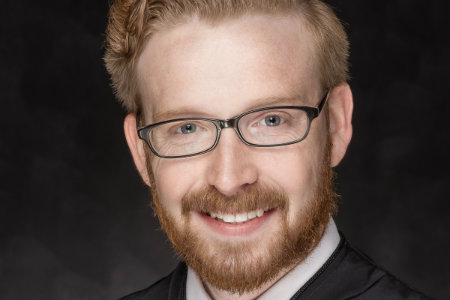 Tyler Atkinson '07 is to receive the Young Alumni Achievement Award at the 2017 Alumni Medal Dinner on October 13. He graduated in only three years summa cum laude while maintaining a 4.0 GPA. Tyler represented Wesleyan in many State and National competitions including Moot Court and Model Arab League. During his freshman year, Tyler worked on the Rambler Newspaper, later becoming a section editor. During his sophomore/junior year, Tyler was elected as the Student Government Chief Justice. Also, he worked as a residential advisor in Stella Hall and as a math tutor in the Academic Resource Center. Tyler was named a Hatton Sumner Scholar and selected as a member of The Guardians of the Golden Shears. During his senior year, Tyler was elected Student Government President. Also, he worked as a lab assistant for the late Dr. Deaton in the geology and physics departments. Tyler was named Mr. Texas Wesleyan and given the Law Sone Award.

Tyler graduated from Texas Wesleyan with a bachelor’s degree in political science and went on to Baylor Law School, graduating in 2010. He joined the City of Fort Worth as a prosecuting attorney soon after. Since 2014, Tyler has served our City as a Municipal Court Judge. At the time of appointment, Tyler was the youngest Judge in the State of Texas. Tyler also works as a sound engineer at Turning Point Church in south Fort Worth.

While at Wesleyan, Tyler married his high school sweetheart Lyndsey who is also a Wesleyan alumnus. They have 4 children and a dog named Wesley.

The Alumni Medal Dinner will be held at the Fort Worth Club on Friday, Oct. 13. The reception begins at 6 p.m., followed by dinner and a program at 7 p.m.

The event is open to all alumni, friends and faculty and staff, and tickets are $60 per person. Register online by Oct. 7. For questions, contact the Office of Alumni Relations at 817-531-7523 or alumni@txwes.edu