Skip to Content
Campus Update 02/26/2021
Texas Wesleyan will resume in-person classes beginning Saturday, Feb. 27. Click here for more.
Please read our updated Privacy Policy to learn about the information we collect and how we use it. This site uses cookies and other third-party services for the purposes of marketing and enhancing the site experience. 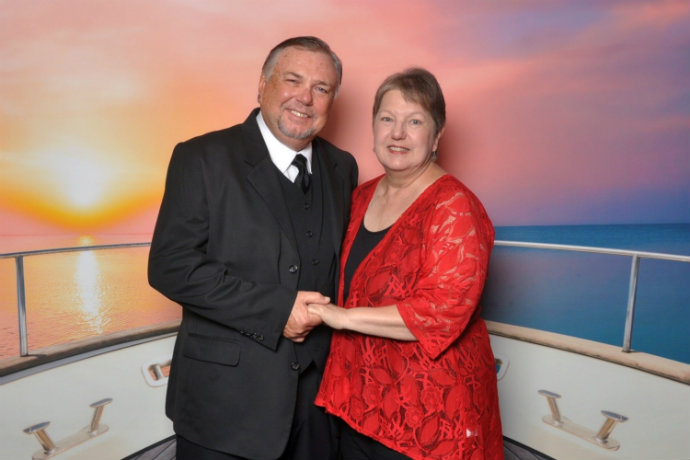 Evan and Janie Faris met as music majors at Texas Wesleyan in 1972 and married in the summer of 1975 right before their senior year. They were very involved on campus as members of the Wesleyan Singers, Phi Mu Alpha and Sigma Alpha Iota. Evan appeared in numerous musicals and Janie was also a member of Gamma Sigma Sigma.

Janie returned to TXWES to finish a Master of Education while Evan started a career in educational technology, after receiving a Master of Science in Computer Education and Cognitive Systems from the University of North Texas. Evan worked his way up to vice president of educational services for Educational Systems Corporation and Janie continued in education. After serving in various administrative roles, Janie retired after 31 years in public education.

Over the years, Janie has also worked with alternative certification teachers all over North Texas. Evan found his way back into education and retired from Burleson ISD as their Chief Information Officer. Upon retiring from education, Evan went to the Culinary School of Fort Worth where he graduated with honors and is now a chef providing private catering. Janie began a career in Real Estate and was named a Best Real Estate Agent by 360 West Magazine for 2017.

Giving back has always been an important part of their marriage. Both have been members of the Alumni Board of Directors and served as president during their tenure. Evan currently serves on the Rams Football Golf Tournament committee. Janie has served on the Board of Trustees for 13 years and is currently chair of the Advancement Committee.

Continuing to use their musical degrees, they both currently sing with the Chancel Choir at Arlington Heights UMC under the direction of Dr. Stephen Simons. They actively support Encore, a TXWES theatre alumni group, and the Friends of Music as well as Wesleyan Fund efforts.

Each year, Texas Wesleyan University honors distinguished alumni and friends. Their achievements and contributions are amazing reflections of the University, and we are honored to celebrate and recognize them each year. Join us as we recognize Evan and Janie as this year’s Alumni of the Year recipients.

The Alumni Medal Dinner is at the Colonial Country Club on Friday, Nov. 2. The reception begins at 6 p.m., followed by dinner and a program at 7 p.m.

The event is open to all alumni, friends and faculty and staff, and tickets are $65 per person. Register online by Oct. 26. Be sure to join us the following day on Sat., Nov. 3, for the Wesleyan 5K and other Homecoming Weekend festivities.

Texas Wesleyan University
At Texas Wesleyan, we have a rich history and a Texas-sized reputation. As stewards of the University, it is our responsibility to build a future as bright as our past.
Upcoming Events
Mar
3
Hyperdocs: Digital Workspaces for F2F and Virtual Students
Mar
6
CANCELED - 2021 Wesleyan 5K
Mar
6
13th annual Duo-Piano Competition
Mar
9
Virtual Town Hall
Mar
10
Mid-semester grades due
Mar
12
'Bibliophilia' in-person and live-streamed musical, Friday 7:30 p.m.