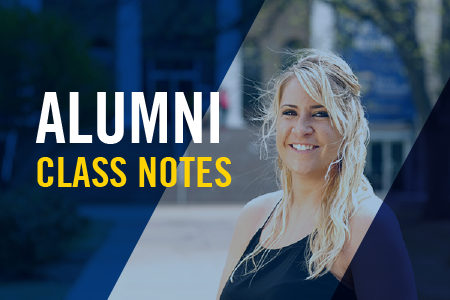 Evan Faris ’76 has been invited to return as a guest chef to the Desserts After Dark event of the Fort Worth Food + Wine Festival. Evan has been a guest chef ever since its inception and this will be his 5th year to participate.

Janie Faris ’77 MA ’83 was recently named an inaugural member of the Circle of Excellence Council for Texas Best Properties in recognition of her outstanding work ethic, professionalism and excellence to every client.

Tim Martinez ’83 was named Volunteer of the Year for Art Launch of Houston.

Thanks to Dr. Kimberly Persley ’89 for delivering the fall commencement address to Texas Wesleyan’s graduating class on December 15.

Janet Hahn ’91 was named a 2018 Legacy of Women Honoree by Safe Haven.

Beverly Powell ’92 MBA ’99, past Chair of the Texas Wesleyan Board of Trustees, defeated her Republican incumbent in the race for Texas Senate District 10.

Jen Teague ’02 opened her Etsy store after many years of making jewelry as a hobby.

Julie Murphy’s ’10 novel, Dumplin’ became a No. 1 New York Times bestseller. The movie, Dumplin’, starring Jennifer Aniston, was based on Julie’s novel and is now streaming on Netflix.

The Hispanic Women’s Network is a state-wide organization that has become a premier women’s organization in Texas, with the Fort Worth Chapter being the largest.  Sandra Garcia '02 MiM '09 was elected Chair, Jeanette Martinez '12 will serve as Treasurer and Branigan Contreras '15 will be Vice Chair of Membership for the 2019-2020 term.

Jordana Abrenica '13 served as the sound engineer for the Broadway musical, SUMMER: The Donna Summer Musical.

Darren White MBA ’16 spotted fellow Wesleyan grad, Niky Morrison ’15 while out for a jog in Jacksonville, FL. Both are working on exciting careers – Darren in personal consulting and Niky in student engagement at Florida Gateway College. Darren sent a photo with the caption of, “Two Rams standing on the Florida coast — I guess it’s true what they say about Rams — ’Smaller. Smarter.’ really does go farther!”

Hayley Eaker '16 was named Teacher of the Month at Bridgeport Elementary School.

Victoria Gallegos ’18 and Luis Calderon ’18 explained why “Smaller. Smarter” was the right path for them when they were featured in the Dallas Morning News.